Both teams lost their last fixture and hence don't have the much-needed winning momentum.

Team Abu Dhabi will lock horns with Deccan Gladiators in the Eliminator of the ongoing Abu Dhabi T10 League 2022 on Saturday, November 3 at the Sheikh Zayed Stadium in Abu Dhabi. The winner of the match will qualify for Qualifier 2 and will face either of New York Strikers or Morrisville Samp Army.

The Chris Lynn-led Team Abu Dhabi finished third in the league stage after losing to New York Strikers in their last league match. Their batting completely misfired in the last match and that is something they cannot afford to do in the do-or-die game.

Gladiators, on the other hand, have had a mixed season so far. They conceded 126 runs in 10 overs in their last match against Morrisville Samp Army and thus, there’s a lot of room for improvement. Tom Kohler-Cadmore played a scintillating innings (41 off 26 deliveries) but failed to get Gladiators over the line.

However, the team will be full of confidence about their chances as the Nicholas Pooran-led side has already defeated Team Abu Dhabi earlier in the tournament. Skipper Pooran was ruthless in that game as he smashed 77* off 33 balls to win the match for his side by 35 runs.

The surface at the Sheikh Zayed Stadium has favoured the batters and they have enjoyed their time in the middle throughout the course of the event. The ball comes really well onto the bat and anything over 120 could turn out to be a good score batting first.

The Aussie pacer Andrew Tye has set the tournament on fire! Despite the format being completely batting-friendly, Tye proved to be a tough bowler to deal with. In seven matches so far in the tournament, the 35-year-old picked up ten wickets. He currently is the second-highest wicket-taker of the tournament. 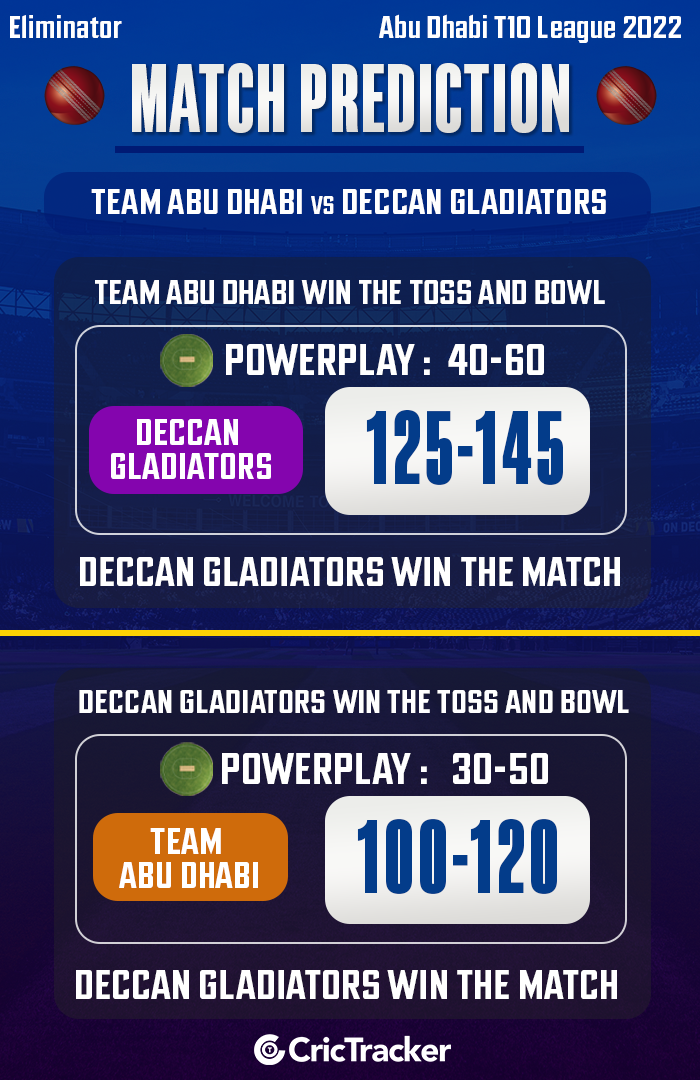