The Deccan Gladiators will look to continue their four-match winning streak in the league against the Strikers.

Deccan Gladiators are all set to cross swords with New York Strikers in the ninth match of the Abu Dhabi T10 League 2022. Both sides are coming off wins from their previous matches and have an understanding of the behaviour of the pitch conditions at the Sheikh Zayed Stadium.

The Gladiators registered their first win at the tournament this year against Team Abu Dhabi and interestingly the side is unbeaten since the last four matches, including last year's edition. The Nicholas Pooran-led side will look to maintain the momentum and clinch another victory against the Strikers.

On the other hand, the Kieron Pollard-led Strikers lost their opening match but swiftly got back to winning ways in the next game that they played. The side will face a rather tricky outing against the in-form Gladiators and an exciting clash awaits on Saturday.

The pitch at the Sheikh Zayed Stadium can witness scores over 110 in 10 overs, but the onus is on the batters to make the most of the batting-friendly surface. Skipper winning the toss could elect to field first so as to have a target in mind, however, batting first too will not be a bad idea.

Pooran has been in terrific form. After smashing an unbeaten 77 off just 33 against Team Abu Dhabi, he went on to notch up 80 runs off 32 deliveries in the next game against Northern Warriors. As the skipper of the side, he has been doing really well and will look to continue the momentum.

The left-arm spinner has the potential to restrict the batters from hitting the big runs and can provide the major breakthroughs. Furthermore, the orthodox spinner can dent the opposition's batting unit’s chances of posting a mammoth total. 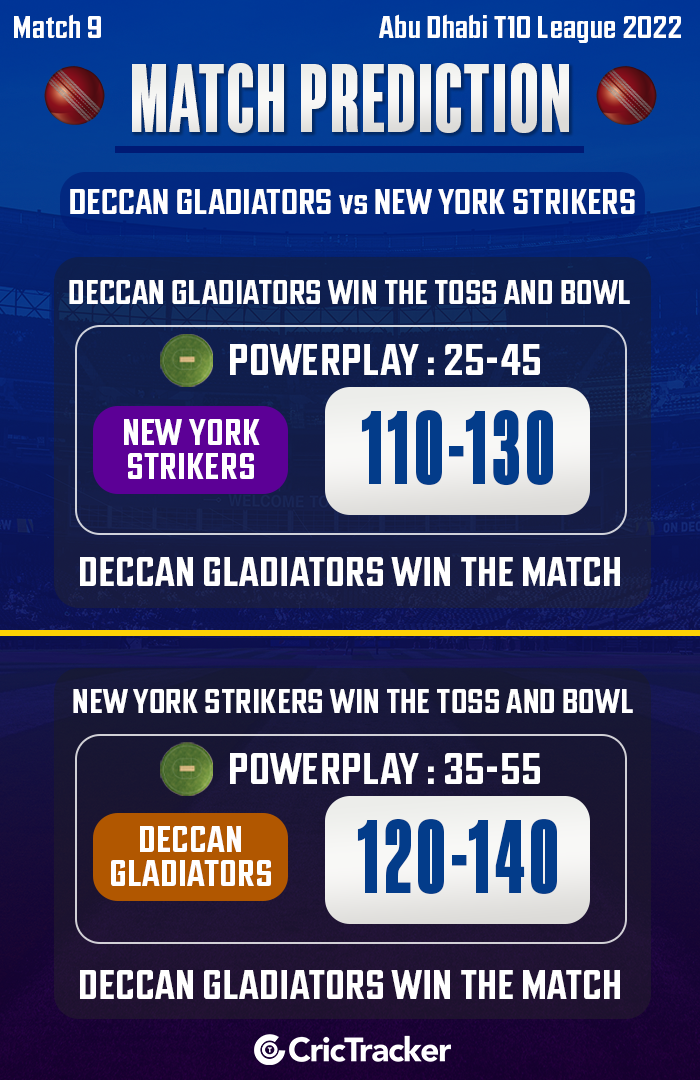 Also Check: Dream11 Team Prediction for DG vs NYS
Disclaimer: This prediction is based on the understanding, analysis, and instinct of the author. While making your prediction, consider the points mentioned, and make your own decision.
Abu Dhabi T10 League 2022
Deccan Gladiators
New York Strikers
Nicholas Pooran
Kieron Pollard
T10 League