Khulna Tigers will be looking to register a second straight win when they face the Dhaka Dominators.

Dhaka Dominators (DD) will be locking horns with Khulna Tigers (KHT) in Match 24 of the Bangladesh Premier League (BPL) 2023 at the Shere Bangla National Stadium in Mirpur, Dhaka on Tuesday, January 24. Both teams have had contrasting fortunes so far in the tournament. The Dhaka Dominators have had a forgettable campaign so far having registered just a solitary win from their seven appearances, with two points in their tally at a dismal NRR of -1.357 and have already hit rock bottom in the seven-team points table.

The Dominators will be heading into this clash after facing Comilla Victorians on Monday, January 23. They had lost their last match against Fortune Barishal by 13 runs.

The Khulna Tigers on the other hand have also had a hot and cold campaign so far and they would now be hoping to showcase consistent performances going forward. The Tigers currently are at the fifth position having won two of their five matches with four points and a net run rate of -0.006.

Khulna had defeated the Chattogram Challengers by seven wickets in their previous encounter.

The surface at the Shere Bangla National Stadium has been a good one for batting . Usually teams prefer chasing at this venue as batting gets relatively easier as the game progresses. The ongoing season has been no different either with sides happily chasing any target in front of them. However, since this match will be played on a used wicket, the team winning the toss might want to bat first and put runs on the board.

Mahmudal Hasan Joy was the star of the Khulna Tigers with the bat in the last game against the Chattogram Challengers where he scored a match-winning half-century. He scored a superb 44-ball 59 in the middle-order which ensured that his side came out on top by seven wickets in the final over.

Veteran Pakistan speedster Wahaz Riaz showed that class is permanent with his match-winning performance against Chattogram Challengers in the previous fixture with a four-wicket haul. The left-arm pacer finished with figures of 4/36 from his four overs at an economy of exactly nine. 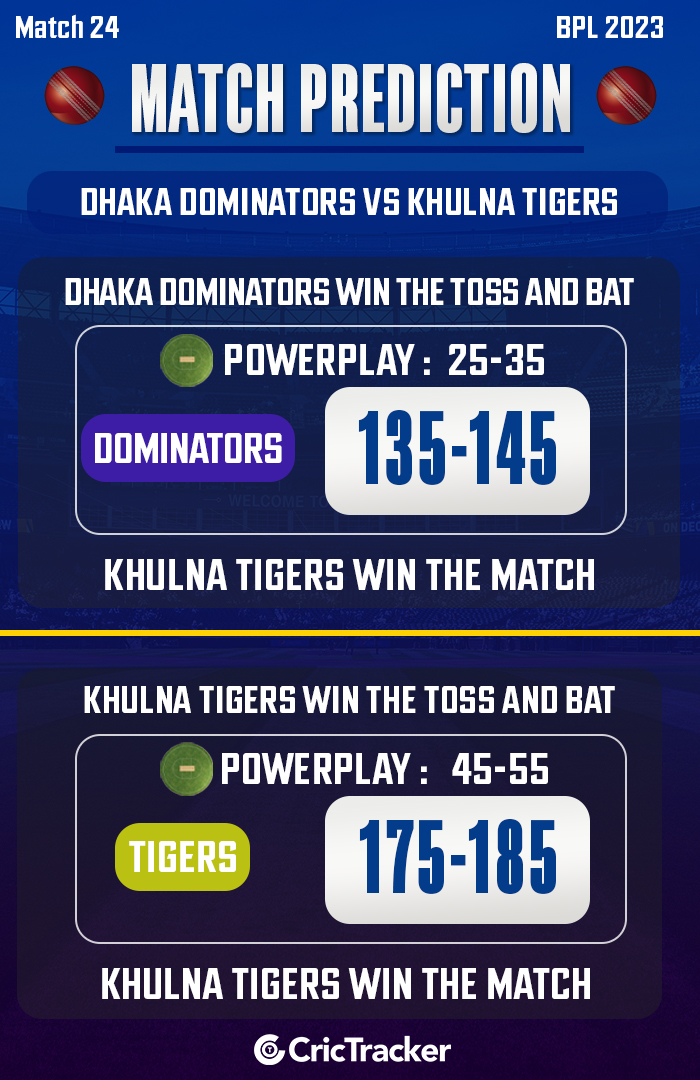