Barbados Royals would be looking to avenge their final league fixture loss when they face Guyana Amazon Warriors in Qualifier 1 of Caribbean Premier League 2022.

The Barbados Royals will lock horns with the Guyana Amazon Warriors in the Qualifier 1 of the  Caribbean Premier League 2022. Both deserving teams have succeeded in making the knockouts of the 10th edition of this tournament. These two teams occupy the top positions in the points table.

The Royals are currently at the top spot, having won eight of their 10 matches and have 16 points to their tally at an excellent NRR of 1.103 and are the firm favourites on paper to make the final.

The Guyana Amazon Warriors on the other hand have also been one of the consistent performers in the competition having won five of their 10 matches and have 10 points to their tally at a net run rate of 0.283.

Guyana head in this contest on the back of a five wicket victory over Barbados in their last group encounter. However, during the reverse fixture clash, it was Barbados who had come out on top by 29 runs via DLS Method. Thus, both teams are expected to put up a good show in this knockout clash.

A high-scoring encounter can be expected in Guyana. The pacers could get some purchase from this surface like they had in the previous fixture. Four games have been won by the teams batting first as compared to two by the sides bowling first. Therefore, taking the record as well as the knockout scenario into consideration, the captain winning the toss will bat first.

Kyle Mayers has had an outstanding CPL 2022 where he has consistently made his bat do the talking with some impactful knocks for the Barbados Royals. While he failed in the last fixture against the Guyana Amazon Warriors, it is to be noted that he remains the third-leading run-scorer having amassed 311 runs in 10 outings. Mayers would be eyeing a solid knock against the same oppostion this time around.

Jason Holder has successfully made the ball do the talking in the ongoing season of the Caribbean Premier League. Holder might have only picked up one wicket in the previous encouter against the Guyana Amazon Warriors, but he remains the second-highest wicket-taker behing his national teammate Alzarri Joseph (16) having registered 15 scalps from 10 games. The senior all-rounder would be hoping to add more to his tally in the first qualifier. 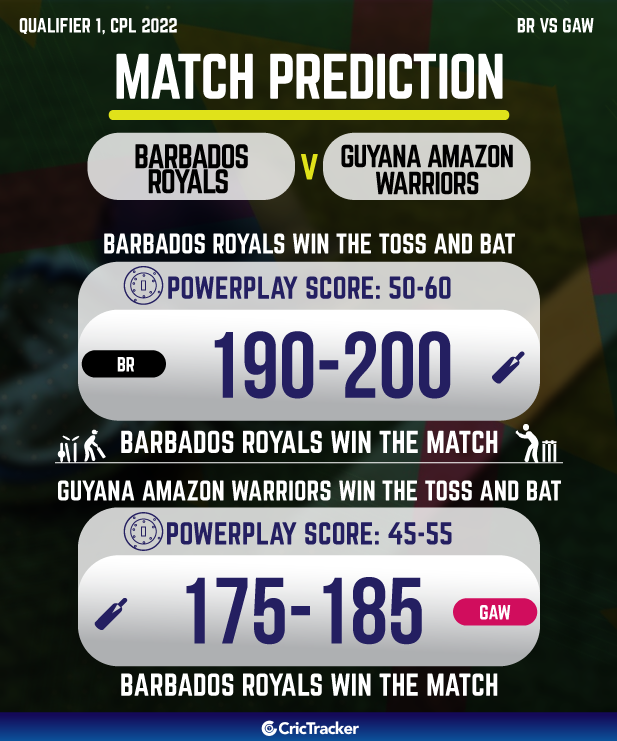