Qualifier 2 between Guyana Amazon Warriors and Jamaica Tallawahs will be played at the Providence Stadium, Guyana.

After a massive loss at the hands of Barbados Royals in the first qualifier, Guyana Amazon Warriors will have another opportunity to qualify for the finals of the Caribbean Premier League. The Shimron Hetmyer-led side will play against the Jamaica Tallawahs at the Providence Stadium in Guyana. The knockout match will see joy in some faces, and tears in some but most importantly, fans can expect a cracker of a game between the two giants of the tournament.

Guyana finished second in the league table and defeated Jamaica in the previous encounter between these two sides. The captain is leading the team from the front and scored 266 runs in the 10 matches that he played. From the bowling perspective, Romario Shephard with 12 wickets is the leading wicket-taker of the side. After a poor start to the season, the Warriors fought back and won five of their last four matches. They are in a good shape but against Jamaica, they can’t take things for granted.

The Tallawahs also have the experience of beating Jamaica earlier in the season. The Rovman Powell-led side finished fourth in the league table and decimated Saint Lucia Kings in the previous match. Former Pakistan international Mohammad Amir is the leading wicket-taker of the team with 15 wickets while Brandon King with 333 runs is the third leading run-scorer of the tournament.

A high-scoring encounter can be expected in Guyana. The pacers could get some purchase from this surface like they had in the previous fixture. Four games have been won by the teams batting first as compared to two by the sides bowling first. Therefore, taking the record as well as the knockout scenario into consideration, the captain winning the toss should bat first.

Pitches in Guyana provide high-scoring games but batting in the second innings has become difficult in recent matches. Thus, batting first is very much ideal in these conditions. The pacers are likely to get a lot of support from the pitch.

The 27-year-old Brandon King is the third leading run-scorer of the tournament. With a batting strike rate of 131.62, the opener has smashed 333 runs in 11 matches that he played. King also scored a brilliant hundred (104 runs of 66 deliveries) in the last match between these two teams.

The speedster has regained his mojo and has played some really good cricket in the CPL. With 15 wickets in his bag, the 30-year-old bowled at an economy of just 6.32. Even though he had a good season, Amir was costly in the last match that these two teams faced. He even failed to pick up a wicket in the match. 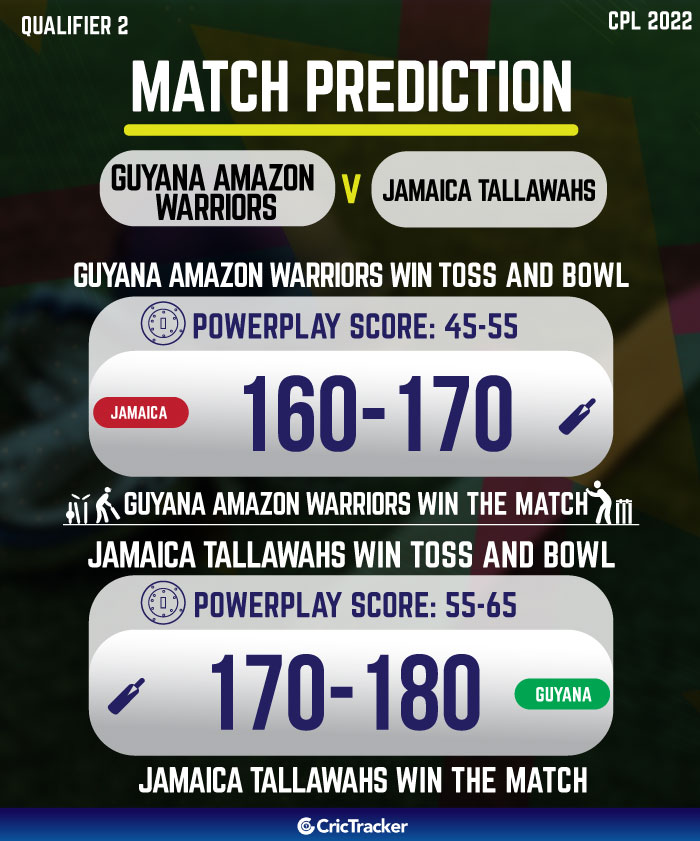