Alzarri Joseph is leading the wickets chart with 15 wickets in eight matches this season.

Guyana Amazon Warriors (GAW) and Saint Lucia Kings (SLK) will be facing each other in the 27th match of the Caribbean Premier League 2022 (CPL) tournament at Providence Stadium in Guyana on Thursday. Guyana beat Jamaica Tallawahs in their last match but still find themselves at the bottom of the league table with just five points in seven matches so far.

The star batter Shai Hope scored the highest 60 runs and Odean Smith smashed 42 runs off 16 balls to put 178/8 on the scoreboard. Then Gudakesh Motie, Imran Tahir, and Odean Smith took two wickets each to win the match by 12 runs. On the other hand, Saint Lucia Kings continued their good run of form with a one-run win against Trinbago Knight Riders in the last match.

The in-form opener Johnson Charles smashed 54 runs off 46 balls to help the Kings score 147 runs while batting first. Then Roston Chase took three and Alzarri Joseph grabbed two wickets to steal a narrow one-run win. This was their third straight win of this season and now they are placed in the second position in the league table with eight points in eight matches. The Kings lost their first match against the Amazon Warriors by six wickets but are favorites to win this reverse-fixture.

The pitch at Providence Stadium has a balanced surface for both batters and bowlers in the T20 game. The average first innings score from the past CPL games is around 140 runs but Guyana side smashed 178 runs in the first match here this season. Pace bowlers are likely to dominate the powerplay overs but there will be very little help for the spinners. Teams batting first have won 20 out of 32 CPL matches here so toss will play a big part in this fixture.

Probable best batter of the Match:

The veteran wicketkeeper-batter has been in sensational form in the CPL 2022 so far. He smashed the highest 54 runs off 46 balls against the Knight Riders in the last match and now leads the scoring charts in this tournament with 342 runs in eight matches at an average of 48.85 and a strike rate of 135.17. His best knock of this season came against the Amazon Warriors where he smashed unbeaten 87 runs off 59 balls and will be eager for the similar performance in the upcoming match.

The 25-year-old right-arm pacer continued his red-hot form with two more wickets against Knight Riders in the last match. Alzarri has taken wickets in every match but against the Amazon Warriors this season. He is leading the most-wickets chart with 15 wickets in eight matches at an average of 14.60 and an economy rate of 6.84 so far. 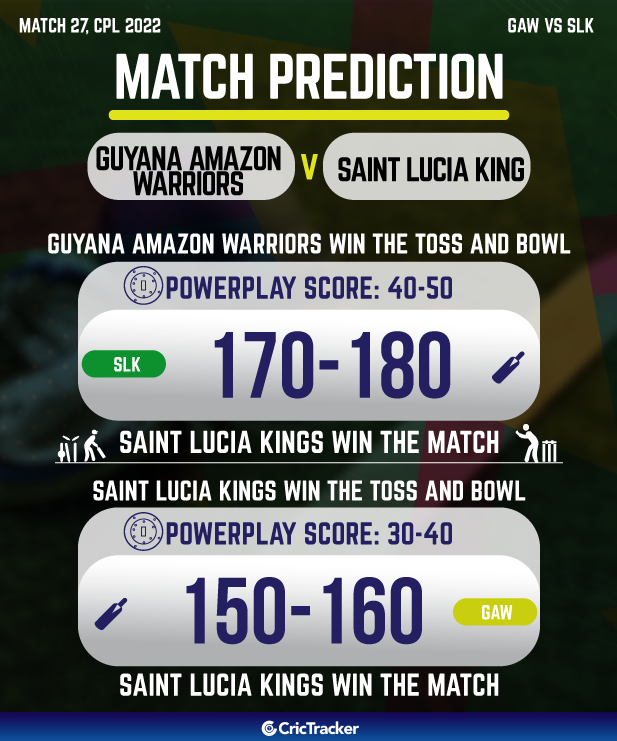