The Trinbago Knight Riders would be looking to avenge their reverse fixture loss when they face Jamaica Tallawahs on Sunday, September 18.

The Trinbago Knight Riders will be locking horns with the Jamaica Tallawahs in the Match 21 of the Caribbean Premier League (CPL) 2022 at the Brian Lara Stadium Tarouba, Trinidad on Sunday, September 18. The Knight Riders have blown hot and cold so far as they have only managed two wins from six matches to occupy the fourth position in the points table with five points and an NRR of -2.058.

The Trinbago Knight Riders would be hoping to avenge their reverse fixture loss against the Jamaica side where they were comprehensively beaten by 34 runs last weekend. The Jamaica Tallawahs, on the other hand, have been consistent so far this season and have succeeded in being in the top two position. They are currently at the second spot in the points table, having won four of their seven matches and losing the other three. Jamaica have eight points to their tally at a superior net run rate of 0.487. Jamaica will be heading into this contest on the back of a hard-fought six-run victory over the Barbados Royals a couple of days ago.

The Trinidad wicket will be expected to be a very good batting track along with consistent pace and bounce. While it will be a batting paradise, the spinners are also expected to get some purchase from this wicket and the surface will also be good for batting in the second innings. Nonetheless, the captain winning the toss will be electing to bat first.

Rovman Powell has been leading the Jamaica Tallawahs by example and has showcased consistent performances with the bat so far. Powell is the highest run-scorer of his team and the fourth-highest run-getter of this season having amassed 218 runs from seven matches. He would be hoping to play yet another impactful knock against Trinbago Knight Riders.

Sunil Narine has turned out to be a valuable asset for the Trinbago Knight Riders with the ball in hand. The mystery spinner is known for bowling game-changing spells and registered outstanding bowling figures of 2/9 against the Guyana Amazon Warriors where he took the priced wickets of Odean Smith and Colin Ingram. Narine would be eyeing yet another match-winning performance. 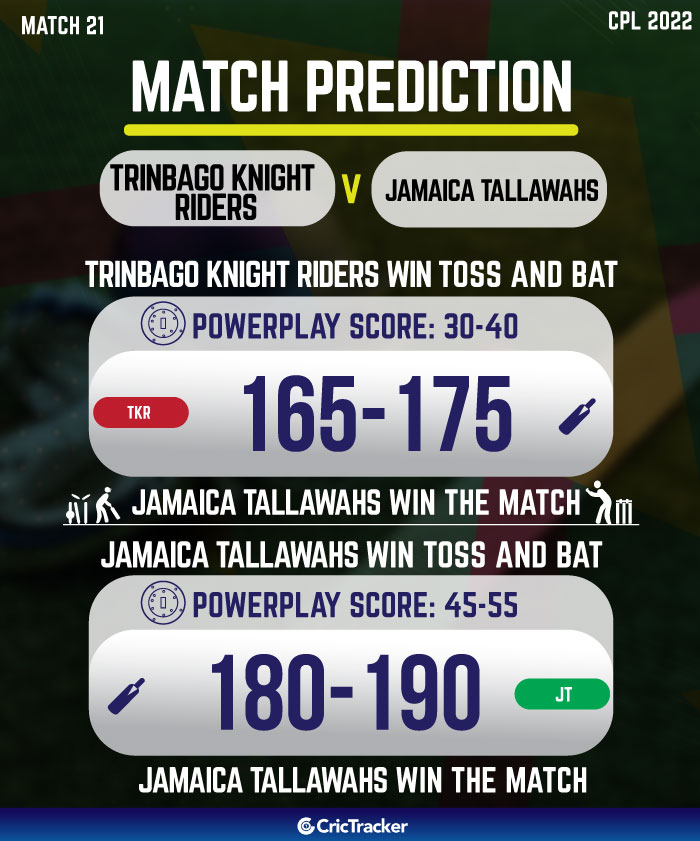