A win for either side will propel their chances of finishing in the playoff spot.

St Lucia Kings and Trinbago Knight Riders will clash in a crucial mid-table clash at the Brian Lara Stadium in Trinidad. A win for either side will be a boost for their playoff hopes. Both teams head into the fixture with two consecutive victories under their belt after a turbulent start to this year's CPL.

Trinbago Knight Riders, the record four-time CPL winners, hasn't had the best of time in this year's tournament, winning just three of their seven matches. The defending champions, St Lucia Kings, much like their counterparts, have also managed three wins but will be hoping for a strong finish at the business end of the tournament.

The surface at the Brian Lara Stadium doesn't offer much resistance to the batters, who enjoy playing their shots at this venue. The bowl does tend to grip in the second half of the match, which would bring the spinners into the game. The team winning the toss are likely to bat first in hopes of setting an insurmountable total on the board.

The top-order batter has been in tremendous touch in this year's tournament and has registered a half-century in three of his last five innings. He overtook Kyle Mayers after scoring a brisk 61 in his previous innings, to take his place at the summit of the run-scoring charts for this season. The wicketkeeper-batter is crucial for his side's chances of making it through to the playoffs.

Alzarri Joseph has found his stride in this year's edition of the CPL and is the joint leading wicket-taker of the tournament with 13 scalps to his name in just seven outings. Although his form has dipped in the last couple of matches, the speedster has been a menace for the batters with his rapid bouncers and yorkers. 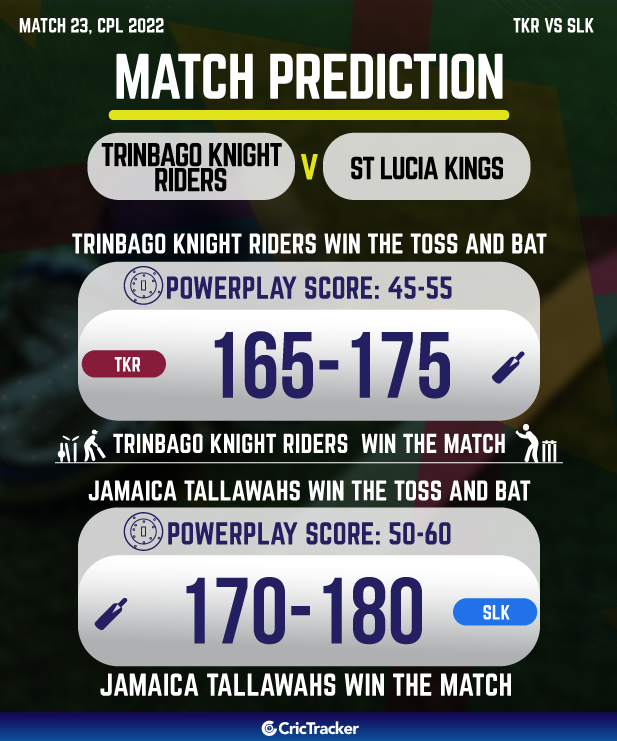