After an impressive three-wicket win over India Capitals, a charged-up Gujarat Giants will be locking horns with the Harbhajan Singh-led Manipal Tigers at Lucknow's Ekana Stadium.

Gujarat Titans will be locking horns with the Manipal Tigers in the third match of the Legends League Cricket 2022 at the Bharat Ratna Shri Atal Bihari Vajpayee Ekana Cricket Stadium on Monday, September 19. The contest will see two of India's World Cup-winning teammates and good friends Virender Sehwag and Harbhajan Singh leading their respective sides.

Gujarat will be heading into this fixture oozing with confidence, having drawn first blood with an impressive three-wicket win over the Gautam Gambhir-led India Capitals in the curtain-raiser. The victory was possible courtesy of a blistering knock of a quickfire 61-ball 106 from Kevin O'Brien. The Giants currently occupy the top spot in the points table with two points at an NRR of 0.693.

The Manipal Tigers on the other hand are yet to kickstart their campaign and will play their first game against the Bhilwara Kings at Lucknow. The Kings will be led by veteran India all-rounder Irfan Pathan. It is to be noted that Harbhajan Singh had captained the India Maharajas against the World Giants in an exhibition match at the Eden Gardens a couple of days ago.

The surface at Ekana Stadium provides a lot of assistance for the batters and spinners alike and the batters need to score the bulk of runs in the Powerplay overs itself by making the full use of the field restrictions in the first six overs. Chasing might be a bit difficult on this track, and since the match will be played on a used wicket, the captain winning the toss would be looking to bat first.

Kevin O'Brien was the match-winner for the Gujarat Giants during their tense run chase against the India Capitals in the opening fixture. His century turned out to be the game-changer for the Giants that helped them in getting over the line by three wickets in the penultimate over. Brien scored 106 runs off 61 deliveries at an outstanding strike rate of 173.77.

Thisara Perera was brilliant with the ball in hand in the tournament opener against the India Capitals and made the ball do the talking when it mattered the most. He took the key wickets of Denesh Ramdin and Rajat Bhatia to finish with figures of 2/16 from his three overs at an economy of 5.33. 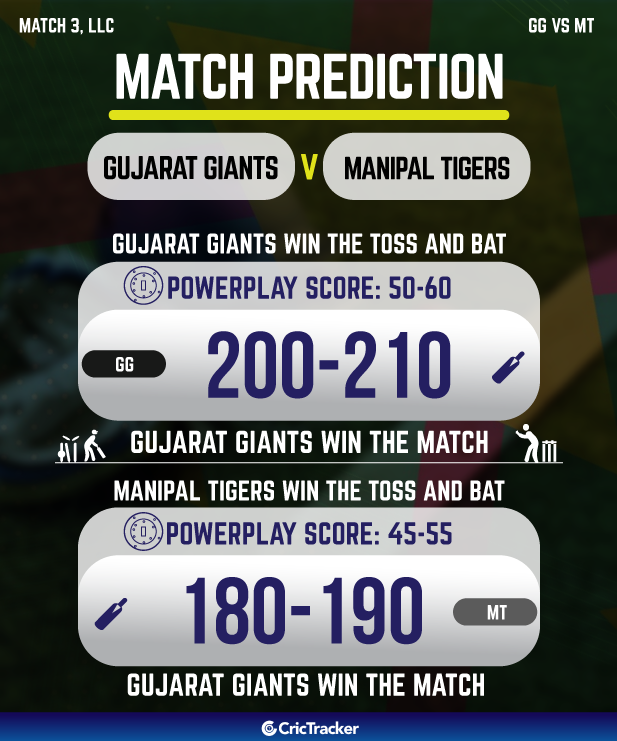