Both teams are coming off a win in their previous games.

India Capitals and Manipal Tigers will square in a mouth-watering clash at the Barabati Stadium in Cuttack in Match 10 of the Legends League 2022 edition. Both teams are coming off a win in their previous game and will be looking to continue the momentum after getting close to the business end of the tournament.

The Gautam Gambhir-led side are currently at the top of the points table with two wins in four games. They had a comfortable win against Gujarat Giants in the previous game and will be looking to consolidate their position at the top.

On the other hand, the Harbhajan Singh-led side managed to pull off a close victory against Bhilwara Kings in their previous game. Despite the win, the Manipal Tigers are at the bottom of the points table with one win in four games and will need to make a move on soon.

The Barabati Stadium in Cuttack is a high-scoring venue and it has been evident in the two games played so far. Going by the results so far at the venue, it will be wise to bat first and put up a big score on board.

Solomon Mire has been in terrific form of late. He scored a 23-ball 41 in the previous game against Gujarat Giants, which setup the run chase for his side. The former Zimbabwe batter had played a monumental knock of 82 earlier in the tournament and can find boundaries at will. With the field inside in the powerplay, Mire can go hard in the first six overs, and keep his side in the driver's seat.

Pravin Tambe is one of the oldest players in the tournament, but he still has been making a lot of impact for his side. He is quite clever with his variations and is expected to be among the wickets column. 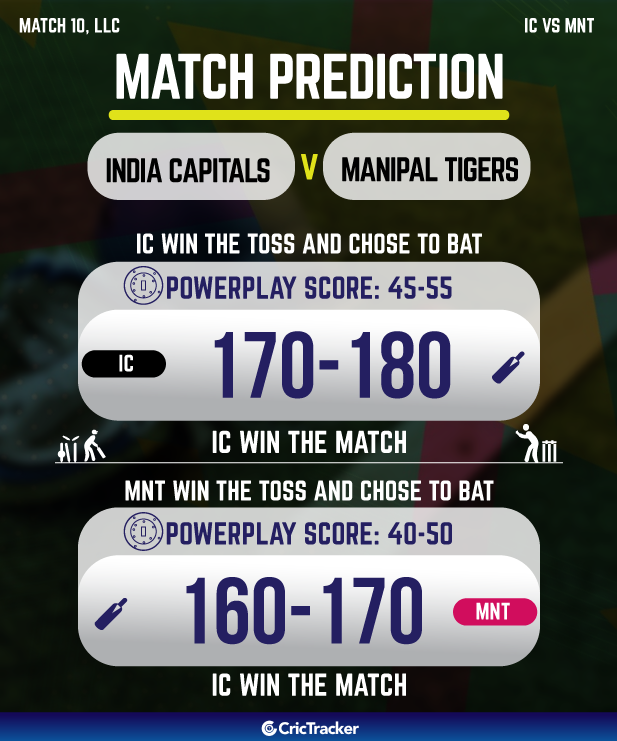