South Africa Legends would be desperate to revive their campaign when they face Sri Lanka Legends in the 10th match of the Road Safety World Series 2022.

Sri Lanka Legends will be locking horns with the South Africa Legends in the 10th match of the Road Safety World Series 2022  at the Holkar Cricket Stadium in Indore on Sunday, September 18.

The Sri Lankan team have been on a roll so far this season, having enjoyed an unbeaten run with convincing wins over Australia Legends and England Legends. Sri Lanka Legends are currently the table-toppers with four points to their tally at an outstanding NRR of +2.159. They come into this contest on the back on an emphatic seven-wicket win over the England Legends four days ago.

The South Africa Legends, on the other hand, have not had a good campaign so far. They were handed a heavy 61-run defeat in the curtain-raiser by the India Legends. The Proteas staged a remarkable comeback with a morale-boosting nine-wicket victory over the New Zealand Legends while their last game against England Legends was washed out due to rain. South Africa Legends occupy the fourth position in the points table with three points to their tally at an NRR of -0.258.

The Holkar Stadium has the reputation of being a high-scoring venue and a run-fest can be expected in this clash once the batters are well set. Batting first is a good option if the results of this ground are taken into consideration. However, since it is a batting paradise, the captain winning the toss will be looking to bowl first.

Tillakaratne Dilshan has been playing the captain’s role to perfection in the ongoing RSWS 2022. He scored a match-winning century (56 ball 107) against Australia Legends. Dilshan would be hoping to make the ball do the talking yet again.

Sanath Jayasuriya bamboozled the England batter with his amazing left-arm spin in the last encounter with a match-winning four-wicket haul. Jayasuriya finished with figures of 4/3 from his four overs, including two maidens at an economy of 0.80. 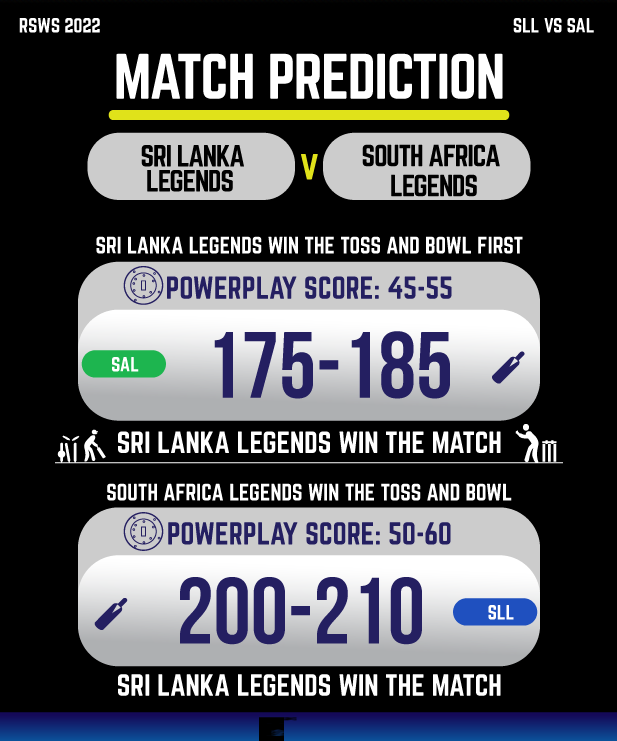