Brandon King is leading the scoring charts with 121 runs in just two matches this season.

Saint Lucia Kings (SLK) will be facing high-flying Jamaica Tallawahs (JAM) in the ninth match of the Caribbean Premier League 2022 tournament at Daren Sammy National Cricket Stadium on Thursday. Saint Lucia's lost against Barbados Royals by 11 runs (D/L method) in their last match. They scored 91/4 in just nine overs while chasing a 163-run target but the match was intervened by rain and cost them a point. The Kings are now placed sixth in the league table with no points.

On the other hand, Jamaica Tallawahs beat Guayana Amazon Warriors in their last match and are now leading the CPL 2022 table with four points in two matches. Pakistani pacer Mohammad Amir took three wickets to restrict the opponents to just 143 runs and then skipper Rovman Powell smashed an unbeaten 44 off 38 to guide his team to a four-wicket win.

The pitch at Daren Sammy National Cricket Stadium is perfectly balanced for both batters and bowlers in white-ball cricket. The average first innings score is 157 runs and teams batting second have won 17 of 29 past CPL matches here.

The experienced West Indies batter continues his good form in CPL 2022 with another crucial 32 off 25 knock against Guyana Amazon Warriors. He Smashed 89 off just 57 in the opening clash against St Kitts and Nevis Patriots and is now leading the run-scoring charts with 121 runs at an average of 60.50 and a strike rate of 147.56 in two matches.

The in-form bowling all-rounder is in great form lately with two wickets while conceding just 31 runs against Barbados Royals in the last match. He smashed 29 off 18 against the Royals, his thrid 20-plus knock in last five T20 matches. Alzarri took four wickets while conceding only 17 runs in the opening clash against the Knight Riders and is leading the most-wickets chart with six wickets in two matches in CPL 2022. 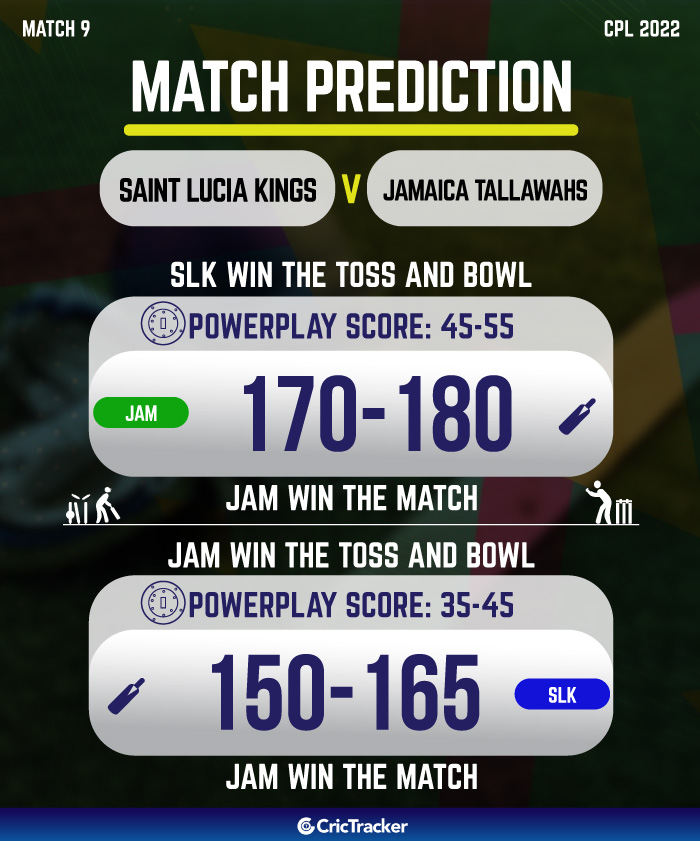