CricToon: Mayanti reminds Stuart that he is no longer a part of the Indian team

CricToon: Mayanti reminds Stuart that he is no longer a part of the Indian team

The Indian selectors picked the Test team for the 3-match series against the touring New Zealand. While they retained 15 of the 17 men who were with the team on the Caribbean tour, all-rounder Stuart Binny along with Mumbai pacer Shardul Thakur were the only two excluded.

West Indies wasn’t the best of times for Binny since he only got to play one tour match and was not considered for the 4 Tests. When he was actually given a chance in the first Twenty 20 International and skipper MS Dhoni introduced him to bowl, the batsman was starting to get going and absolutely relished batting against his gentle medium pace on a beautiful batting wicket.

He was hit for 5 sixes and the over turned out to be a massive disaster Team India went on to lose the game by the smallest margin of 1 runs. Binny didn’t bowl in the match again and wasn’t considered for the second and last T20I either which was eventually washed out.

Another notable aspect is that whenever Stuart has failed to perform on the field his wife Mayanti Langer who is a prominent anchor has been targeted by internet trolls and she has on multiple occasions stated that she stands firm by her husband’s side and that the trolls need to rather focus on doing something better with their life.

A few might also consider this falling in similar lines but is an attempt at light-hearted humour and should be accepted with similar spirit. 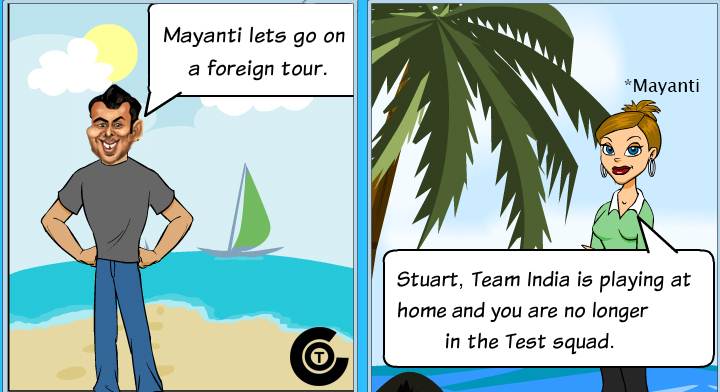