Gihahn Cloete’s 25-ball 46* helped the Warriors to defeat the Titans in the first game.

The VKB Knights and Warriors got off to contrasting starts in the CSA T20 Challenge that began on Friday. In the tournament opener, the Warriors stunned the defending champions Titans, although, in a rain-affected game. The home team posted a huge total of 216/5 in their 20 overs. Chasing a big total, the Warriors added an unbeaten 60-run stand for the first wicket in six overs.

Gihahn Cloete’s 25-ball 46* helped the Warriors to stay four runs ahead of the DLS par score of 56/0 after six overs. The VKB Knights, on the other hand, were restricted to only 133/8 despite a good start against the Dolphins. The Knights were 56/1 into the 6th over but lacked partnerships after the powerplay. Dolphins also struggled with the bat but completed the chase with nine balls to spare.

The 4th match of the CSA T20 Challenge 2019 will be played between VKB Knights and Warriors at the Diamond Oval in Kimberley.

The Diamond Oval will host a Twenty20 for the first time since 2017 and its first T20 under the lights since November 2015. The venue has witnessed some good scores, especially during the night matches. The team batting first is expected to post 160 a total that can be chased down easily.

Patrick Kruger is a useful batsman at the top in the Twenty20 format. Opening the innings helps him to bring his best out. The 24-year-old is good at providing breakthroughs occasionally as well. Having Kruger at the top is quite a decent move but consistency is the only point that stands against him. 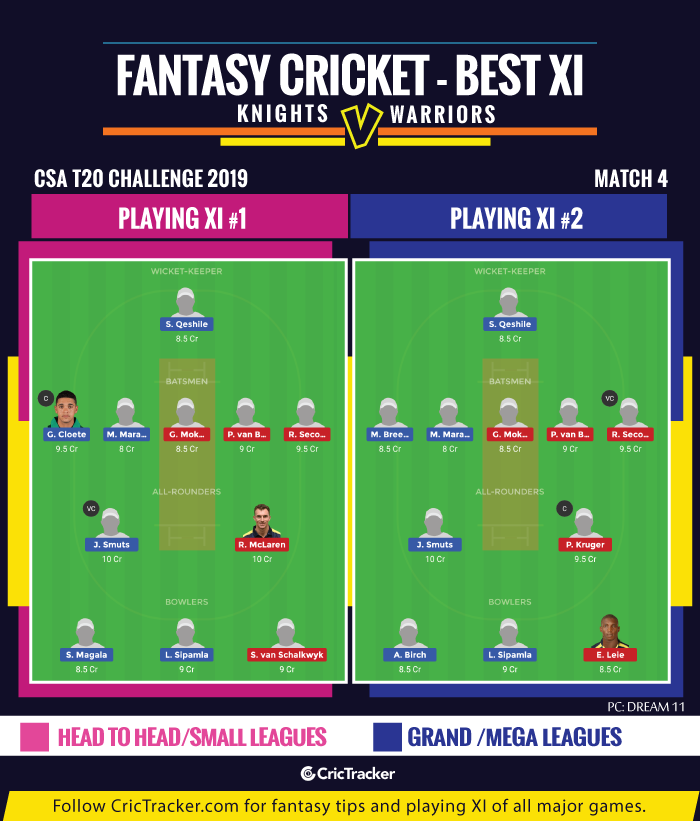 The batting order of Warriors wasn’t exposed due to the rain-affected first game. It will be interesting to see what batting line-up will follow after the opening pair of Gihahn Cloete and Matthew Breetzke.

The Warriors are expected to register their 2nd straight victory by defeating the VKB Knights.