Eoin Morgan and Co need a win desperately to get back in the top four.

For Chennai Super Kings (CSK), there’s nothing, but pride to play for in the 2020 edition of the Indian Premier League (IPL). The team, captained by MS Dhoni, became the first team to be eliminated from the T20 extravaganza.

However, they can take heart from the fact that they beat the Royal Challengers Bangalore (RCB), led by Virat Kohli, by eight wickets in Dubai after a strong all-round show. The Yellow Army will next be facing the Kolkata Knight Riders (KKR) on Thursday, October 29 in Dubai itself.

In their previous meeting, CSK faltered in the run-chase and lost at the Sheikh Zayed Stadium. As far as KKR are concerned, they need a win to get back in the top four. Eoin Morgan and Co would be going into the game on the back of an eight-wicket defeat at the hands of Kings XI Punjab (KXIP).

The pitch in Dubai has been a good one as Delhi Capitals (DC) amassed 219 runs losing only two wickets. The track has helped the spinners also as Rashid Khan picked three wickets and conceded only seven runs.

Both teams have strong bowling attacks and may wish to bat first. The conditions will be warm with the temperature around 30 degrees Celsius. The humidity will be in the 40s.

Playing Combinations for CSK vs KKR

Sam Curran has been a shining light for the Super Kings in the tournament. The southpaw has performed efficiently with both bat and ball. In the last game, the left-arm pacer picked up three wickets and restricted RCB to a below-par score.

Curran has 173 runs at an average and strike-rate of 21.62 and 136.22 respectively. He is also their leading wicket-taker with 13 wickets to his name.

Sunil Narine has had his travails with the ball in hand. However, the West Indies tweaker made his comeback and is currently a part of KKR’s plans. With the bat, the left-hander notched a half-century against the Capitals and he is in a good rhythm. Last time around against CSK, he was introduced into the attack after the 10th over and he helped his team win the game from a stage of hopelessness.

CSK vs KKR Head to Head 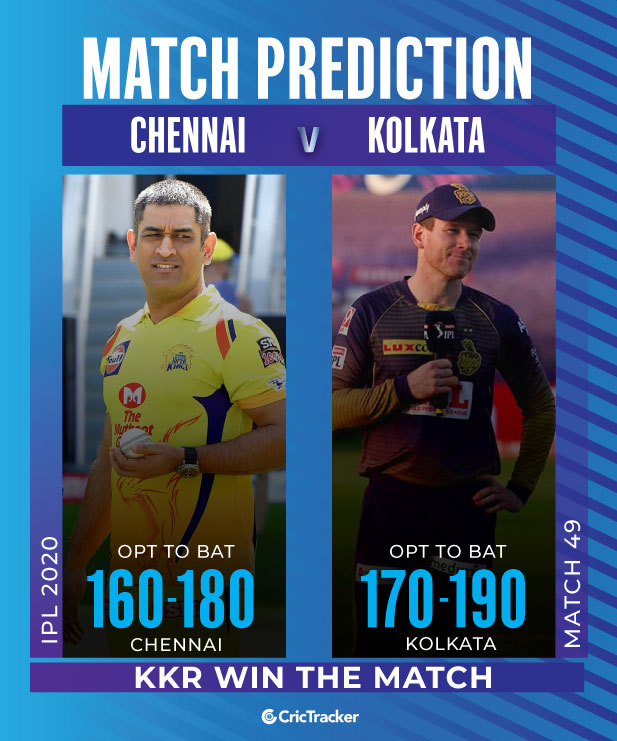