KXIP need a victory to stay alive in the competition.

Kings XI Punjab (KXIP) made a stupendous comeback in the 2020 Indian Premier League (IPL), winning five matches in a row after only a solitary victory from their first seven matches. However, despite their impressive run, KL Rahul and Co find themselves in a bit of a hole as far as making the playoffs are concerned.

They will next be facing Chennai Super Kings (CSK) on Sunday, November 1. It’s a must-win game for them at the Sheikh Zayed Stadium in Abu Dhabi. If they lose their last league game, they stand a chance of being eliminated.

A result in Sunday’s second game between Kolkata Knight Riders (KKR) and Rajasthan Royals (RR) would throw KXIP out of the event. For the Super Kings, they will be looking to end their campaign on a high after winning their last two games.

The pitch in Abu Dhabi has been an absolute belter for batting and the bowlers have had to strain in order to find success. From the last few games, not many wickets have gone down and teams, batting second have tasted quite a bit of success.

The conditions will be warm and sunny with the temperature around the 31 degrees Celsius mark. The humidity will mostly be in the 30s.

Playing Combinations for CSK vs KXIP

Ruturaj Gaikwad didn’t have a great start to the season. After recovering from COVID-19, he managed a couple of ducks to begin his IPL career and lost his place in the team as well.

But in the last two matches, the youngster put his best foot forward. He was on top of his game against KKR, scoring 72 runs before Pat Cummins dismissed him. He also got the Player of the Match award.

Chris Gayle has been on song ever since he made Punjab’s playing eleven from their eighth game onwards. He also became the first batsman to smash 1,000 sixes in his T20 career, showing his class and calibre.

In six games, he has 276 runs at an average and strike-rate of 46 and 144.50 respectively. In the last game against Royals, he scored 99 and then got out to pacer Jofra Archer.

CSK vs KXIP Head to Head 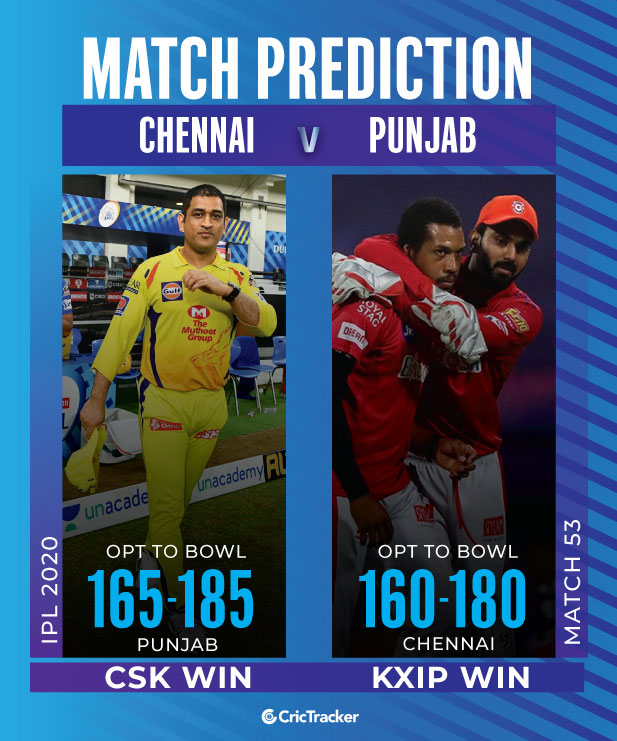