Rohit Sharma, ICC tournament and Bangladesh, it seems as if the love triangle will not be broken sometime soon. When India faced Bangladesh in the Quarter-Final of the 2015 ODI World Cup, it was Rohit who scored a match-winning century. Fast forward to 2017 and this time, it was the Semi-Final of the ICC Champions Trophy where the right-hander once again made a mockery of the neighboring country.

Pakistan had made it to the final a day ago and everyone was praying for India to win the match so that they would get to see India and Pakistan in the summit clash. All the prayers were answered as India literally thrashed Bangladesh in the second Semi-Final at Edgbaston. It was a clinical performance as they outplayed the opposition in all 3 departments of the game.

Earlier, India won the toss and opted to bowl. Bhuvneshwar Kumar provided the perfect start and bagged 2 quick wickets. Tamim Iqbal and Mushfiqur Rahim then added 123 runs for the 3rd wicket and each got to their individual half-centuries as they looked set to get past 300. But after their dismissals, a collapse happened and they could utter 264/7 at the end of 50 overs.

It was not going to be too difficult for the strong batting line-up of India to chase the mediocre score. Rohit Sharma ensured India went past the line without any hiccups. Here’s a look at how his innings panned out.

Mixed caution with aggression up front

The Mumbai batsman got off the mark with a couple off the first ball but played out the rest of the over without taking any risks. His partner Shikhar Dhawan went on the attack from the outset but Rohit was quiet in his approach. After scoring just 3 off 9 balls, the right-hander got going with 3 boundaries in the 4th over off Mustafizur Rahman.

Usually, he takes the time to settle at the top but here, his scoring rate was high even in the early part of the innings. The fluency was there, the drives were flowing, the pulls were finding the ropes and everything was clicking for the 30-year-old. Together with Dhawan, he took India’s score to 63 without loss after 10 overs.

Combined well with the captain

Dhawan looked in top form once again and he was the one took the charge of scoring quickly. Rohit played second fiddle to him for a while and allowed his partner to flourish. But when Dhawan got out in the 15th over, a wonderful opening partnership of 87 ended.

The skipper Virat Kohli walked in to bat who likes to spend some time at the crease before opening up. That’s where Rohit took the matters into his own hands and struck 2 back to back boundaries off Shakib Al Hasan in the 15th over to bring up his fifty off 57 balls.

The duo didn’t even give a whisker of a chance to the opposition. Kohli didn’t waste much time to get going and hit some delightful boundaries. The class was pouring from either end as both Rohit and Kohli put up a show of wonderful batsmanship.

The bowlers were absolutely clueless and India just kept inching closer to the spot in the final. The boundaries flourished and the 100-run partnership was up. Come the 33rd over. Rohit was 4 short of the three-figure mark. Off the last ball of the over, Mashrafe Mortaza dragged one short and Rohit played his signature hook shot.

The ball landed over the boundary cushion and the umpire had both his hands raised towards the heavens that signaled Rohit had notched up his 11h ODI century. It was his first century in the Champions Trophy and the second against Bangladesh.

There was just formality left in the chase to get to the target. The pair took the side past the line in the 41st over with Rohit remaining unbeaten at 123 off 129 balls that included 15 fours and a six. Kohli also made 96 not out off 78 balls as India won the match by 9 wickets and will now face the arch-rivals Pakistan this Sunday at the Oval, London in the final.

Rohit, for his wonderful hundred, is CricTracker’s Player of the Match and earns a rating of 4.5 out of 5. 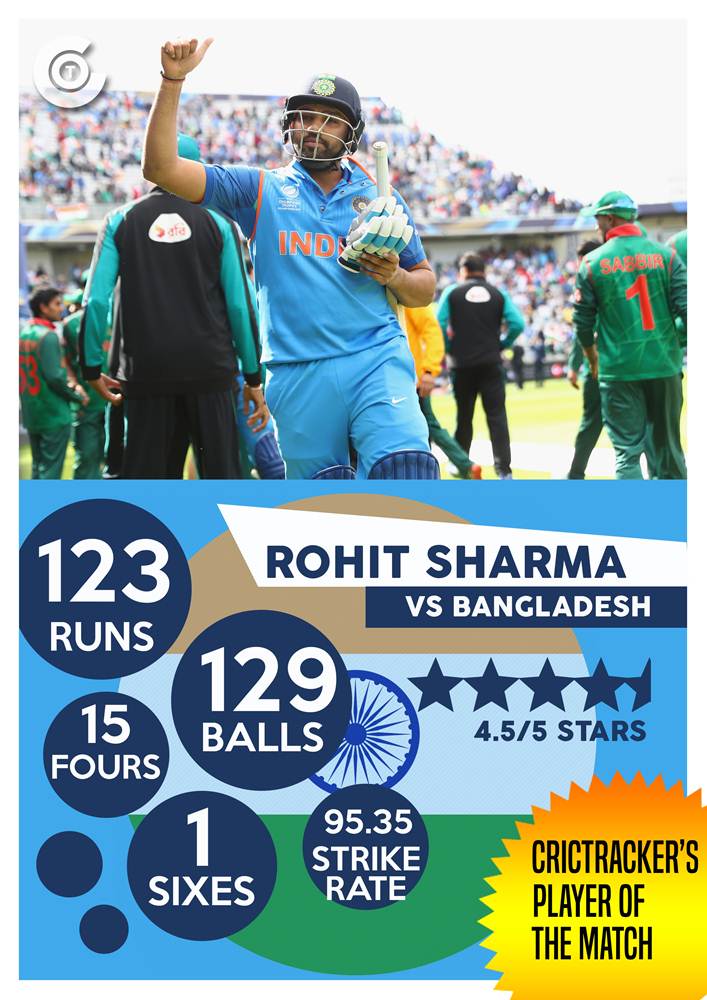