The 16th match of the Indian Premier League (IPL) 2020 will be played between Delhi Capitals and Kolkata Knight Riders at the Sharjah Cricket Stadium in Sharjah.

The Delhi Capitals and Kolkata Knight Riders will move to Sharjah for the second game of the double-header on Saturday. Both these sides have done quite well thus far in the tournament winning two games each out of three. Moreover, these two sides have got a good net run rate as well. Delhi and Kolkata will be playing their first game in Sharjah.

With the short boundaries and the big hitters that they have in their squads, another run-scoring fest is surely on the cards. Both the teams will love to give their best shot at trying and winning this encounter. As far as the head-to-head record goes, Kolkata Knight Riders won 13 games while the Delhi Capitals won 10.

It will be typical Sharjah weather for this game as well. The temperature will be around 33-34 degrees Celsius while there would also be strong winds blowing around initially.

It is an absolute belter of a track here that is on offer in the Sharjah Cricket Stadium. The average first innings score of 220 is an indicator of the quality of this track. Another high-scoring game is on the cards.

220 (Thus far at this venue in this tournament)

Shubman Gill has been the pick of the batsmen for KKR with 124 runs in three games at an average of 62. However, he would want to improve on his strike rate which is 116 now.

Rishabh Pant scored 96 runs so far in the tournament. But his strike rate of 119 is quite surprising and he’d fancy playing more aggressive cricket.

Eoin Morgan returned with scores of 42 not out and 34 not out in the last two games and has been in great touch in the last year or so. He will have an important role to play for KKR once again.

Shivam Mavi has been excellent with the ball and has accumulated 4 wickets in three games while having an economy rate under 7.

Kagiso Rabada is amongst the leading wicket-takers in the tournament and has picked up 7 wickets in just 3 games. His economy rate of 6.25 is fabulous.

Shreyas Iyer, who scored 82 runs till now, has got off to good starts but hasn’t been able to kick on and play the big knocks. The skipper would like to lead from the front in this match. 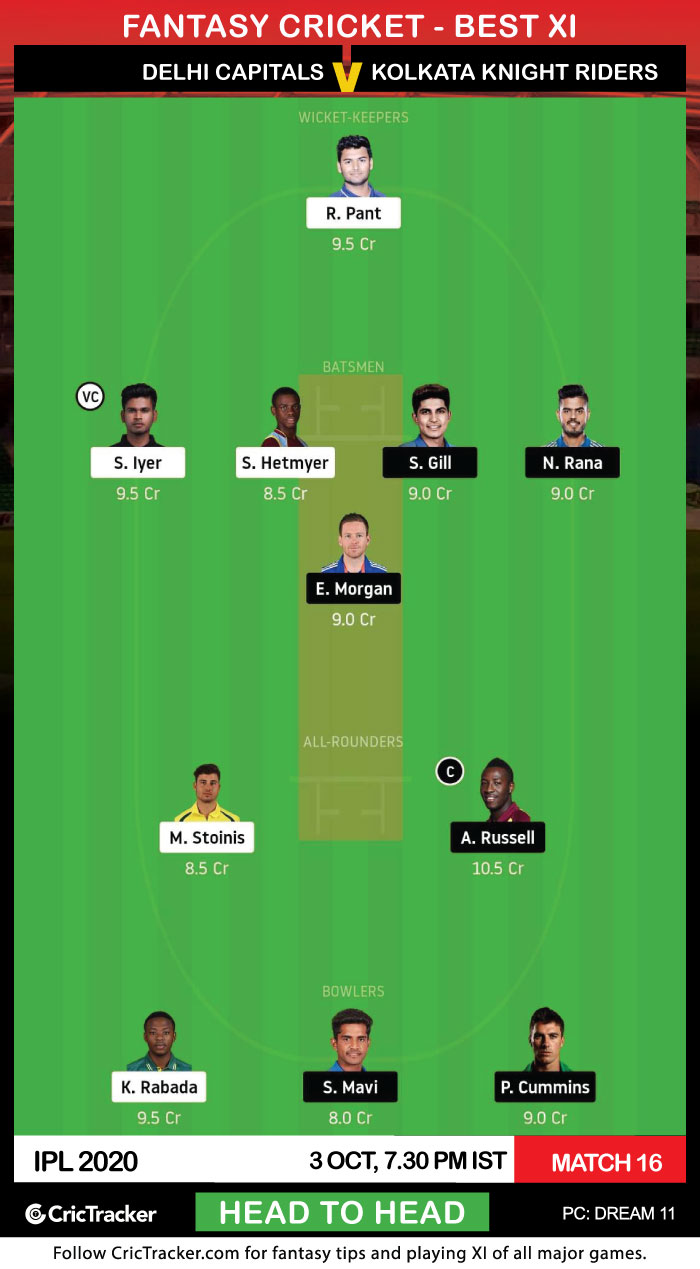 It is a very small ground at Sharjah and hence it could be a run-feast once again. Have players who hit the big shots often as the multipliers in your team.

The team chasing is expected to win this encounter.