Prachi Singh has commented on a few of Shaw's previous posts and the cricketer has even replied to her.

Delhi Capitals batsmen Prithvi Shaw was exceptional in the team’s previous game against the Chennai Super Kings (CSK) in the ongoing Indian Premier League (IPL). His 43-ball 64-run knock helped the Capitals post a daunting total on the board and then restrict the three-time champions to win the game by 44 runs. While Shaw has been impressive on the field, the cricketer is in the news for his off-field antics too.

Not long ago, his name was being linked with actress Prachi Singh. She was seen commenting in a few of his Instagram posts. Moreover, even Prithvi Shaw wasn’t shying away from responding to her comments with smileys. However, Prachi, who hogged the limelight for her role in famous serial Udaan has given a massive hint about her dating the cricketer in her latest Instagram activity.

Prithvi Shaw won the Man of the Match award for his exceptional knock against the CSK. Prachi Singh soon posted a story on her Instagram handle about the same lauding the opening batsman for his performance. 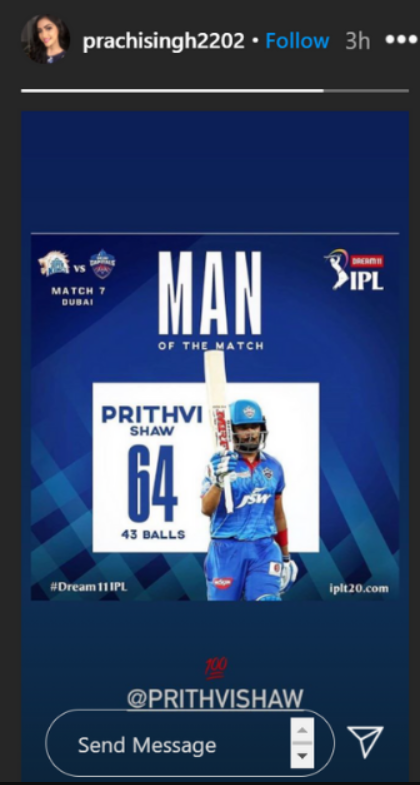 Prithvi Shaw had commented on Prachi Singh’s post in August

Interestingly, even Prithvi Shaw has commented on Prachi Singh’s posts in August during the lockdown. Even the fans are now sensing that the couple is dating each other and it remains to be seen if one of them confirm or give any clarification about the same in the near future. 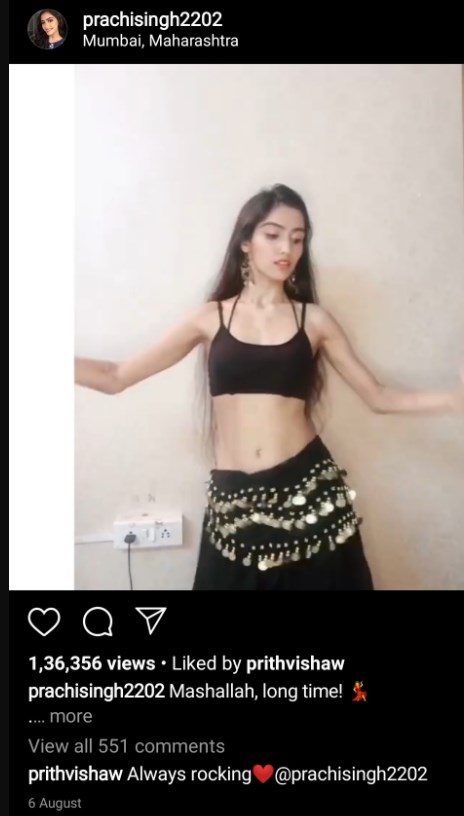 As of now, looking at the social media activities of both, Shaw and Prachi, it could be said that they are flirting with each other and might be dating each other. Meanwhile, Prithvi Shaw will also be keen on concentrating on his game having started the IPL 2020 season on a good note. He is opening the innings with Shikhar Dhawan and will be looking forward to contributing to the team even more in the upcoming matches.

The Capitals are next scheduled to face the Sunrisers Hyderabad (SRH) on September 29 in Abu Dhabi. They are the only team to have not lost a game so far after the first week.