It's a battle between the table-toppers and the cellar dwellers.

Delhi Capitals (DC) and Sunrisers Hyderabad (SRH) have had contrasting fortunes thus far in the 2020 edition of the Indian Premier League (IPL). Even as Shreyas Iyer’s DC are unbeaten are at the top of the points table, the Orange Army, led by David Warner, are yet to open their account in the tournament.

DC must be high on confidence after their 44-run win over Chennai Super Kings (CSK). The Sunrisers, on the other hand, lost to the Kolkata Knight Riders (KKR) by seven wickets and are the current cellar dwellers.

However, going into the next game, SRH can take heart from the fact that they are ahead of DC on head-to-head count. Above all, their bowling has been a major concern, while the Capitals won their first two matches, based on their bowling attack itself.

The pitch in Abu Dhabi has showcased a decent battle between bat and ball. Spinners and fast bowlers have had their say on the deck. But the batters have shown that run-making isn’t all that tough if they are ready to do the hard yards. The conditions throughout the match will be warm with the temperature around the 34 degrees Celsius mark. The humidity will be in the mid-40s.

Playing Combinations for DC vs SRH

Rishabh Pant has some decent numbers against the Sunrisers attack, which is currently out of form. In nine matches, the left-hander has 328 runs at an average and strike-rate of 46.86 and 162.38 respectively.

His top score of 128* came back in 2018 at the Arun Jaitley Stadium. In the ongoing IPL, the Young Turk has 68 runs from two matches at an average of 68 with a highest score of 37 not out.

Jonny Bairstow scored a fifty against the Royal Challengers Bangalore (RCB, but failed against the Knight Riders. As far as DC are concerned, he got scores of 48 and 41 against them last season.

He averaged 44.50 with a strike-rate of 150.85. Bairstow has an IPL average over 50 and hence, he’s consistent. The Capitals need to get rid of the big fish. Otherwise, he could turn brutal later.

DC vs SRH Head to Head 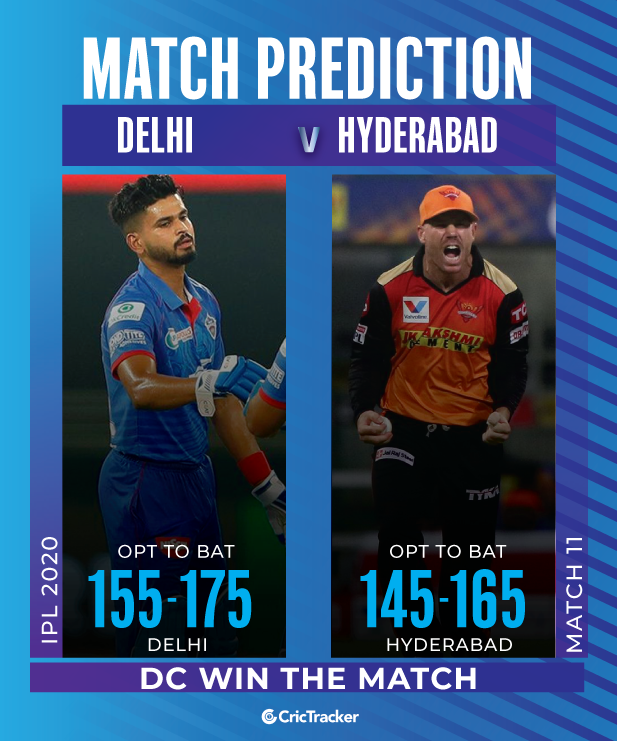