It is advisable to pick both Nicholas Pooran & Rahmanullah Gurbaz as wicket-keepers in your 11Wickets Fantasy teams.

The Final of the Abu Dhabi T10 League 2021 season will be played between Delhi Bulls and Northern Warriors on 6th February, at the Sheikh Zayed Stadium in Abu Dhabi.

This match will start at 09:30 PM IST (08:00 PM local time). It will be live on Sony Sports Network and live streaming is available on Sony LIV.

Delhi Bulls and Northern Warriors, the two teams who have arguably looked the strongest in this edition of the Abu Dhabi T10 League, will lock horns in the all-important final. These two sides met yesterday in the Qualifier tie, where Delhi Bulls came out victorious.

Having said that, confidence will be high in the Northern Warriors camp as well. The reason for that is, after losing to Bulls, they defeated a strong Team Abu Dhabi side in the Eliminator 2 to book their place in the final. All in all, the fans can expect the conclusion of this competition to be a cracker.

DEB vs NOR Weather Report for Final:

The temperature will be around 23 °C during the time of the match, with the humidity being around 60%. The chances of precipitation are, for everyone’s benefit, nil.

Interestingly, batsmen are not getting as much help from the track nowadays as they used to get in the first 4 or 5 days. As of now, anything over 110 can be a competitive total.

DEB vs NOR Top Picks for Today’s 11Wickets Match:

Fabien Allen has done a good all-round job for the Warriors. He has scored 57 runs and has also picked up 10 wickets. He was the man of the match in the last match, where he picked up 4 wickets for just 13 runs in his two overs.

Wayne Parnell has been the best performer for the Warriors in the bowling department. He has scalped 6 wickets and has an economy rate of under 10 runs per over.

Evin Lewis has been brilliant with the bat for the Delhi Bulls. He has scored 206 runs at a strike rate of over 200.

Nicholas Pooran is currently the leading the run-scoring charts for Northern Warriors. He has scored 229 runs at a strike-rate of over 250.

Waseem Muhammad has been a consistent performer for the Warriors. He has scored 185 runs at a strike rate of over 255.

Ravi Bopara has been impressive with the bat for the Bulls. He has scored 156 runs at an average of 52, while maintaining a strike rate of over 200.

Suggested Playing XI No.1 for DEB vs NOR 11Wickets Fantasy Cricket: 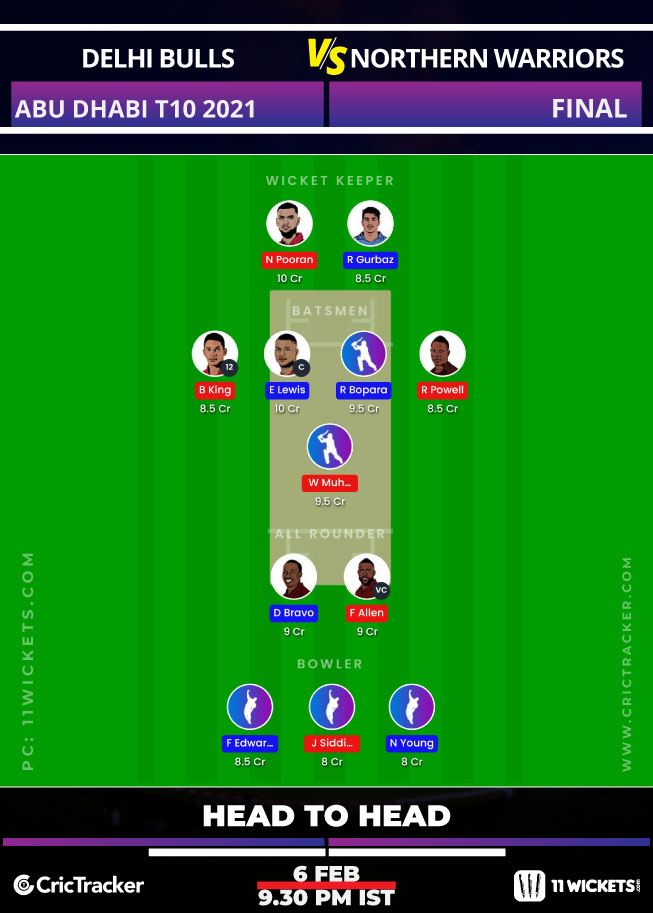 Suggested Playing XI No.2 for DEB vs NOR 11Wickets Fantasy Cricket: 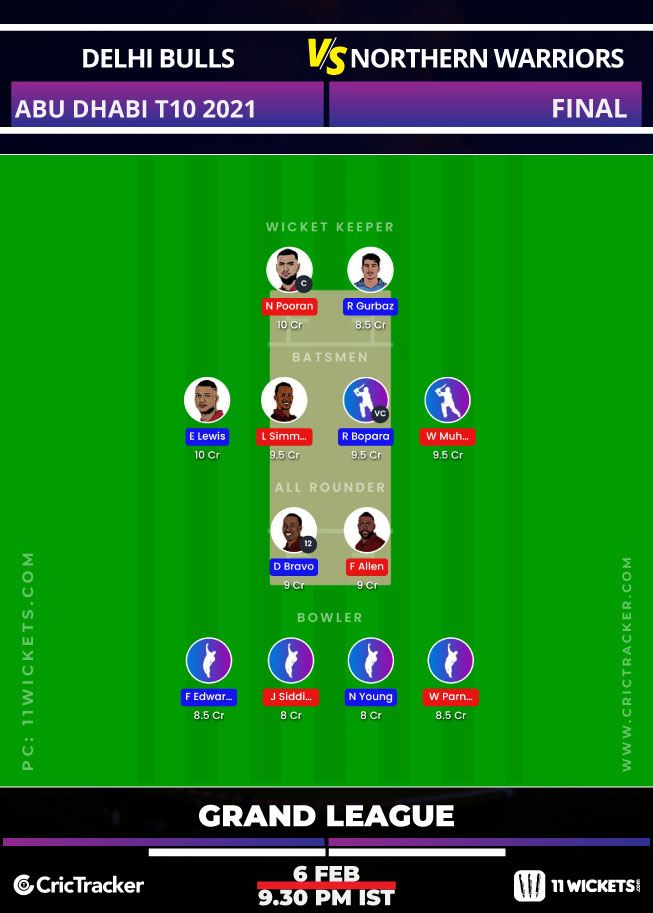 It is advisable to pick both Nicholas Pooran & Rahmanullah Gurbaz as wicket-keepers in your 11Wickets Fantasy teams. They both are in brilliant form this season and hence can give you some valuable points.

Today’s DEB vs NOR Probable Winners: