Joe Root is performing well for Yorkshire. In their last match against Lancashire he scored 64 runs with the bat and also picked 2 crucial wickets and will be a good bet against Derbyshire.

The North group match of the T20 Blast 2020 will be played between Derbyshire and Yorkshire at Headingley, Leeds on Sunday.

The match is scheduled to start at 1:00 PM local time (5:30 PM IST) and is being streamed live on Fancode.

The upcoming North group contest of the T20 blast is to be played between Derbyshire and Yorkshire at Headingley, Leeds. Derbyshire are at the bottom of the table with 4 points. They have lost 6 matches so far while their only win in this competition came against Leicestershire. In their previous match, they lost to Nottinghamshire easily by a margin of 8 wickets.

Batting has been a major concern for Derbyshire in this tournament. They have only managed to score at an average of 147 so far which is quite ordinary to their standards. Keeping aside all these issues they want to end the tournament on a winning note on Sunday. Yorkshire on the other side have managed to win only 2 matches, with 6 points they are now placed 5th in North group just above Derbyshire.

They are not in the right track, losing their last 4 matches. In their previous match, despite all-round performances from Joe Root they lost to Lancashire by mere 7 runs. At one stage they were cruising to victory, requiring 8 runs an over in last five overs with 8 wickets in hand but failed to cross the finishing line. Last time when they met each other Yorkshire beat Derbyshire by a huge margin of 99 runs. Both the teams will be playing for their prides as they are already out of knock outs.

It will be mostly sunny in Headingley with a temperature of 17 degree Celsius and the chances of precipitation for this match is low.

The pitch here at Headingley is favourable for batting and it is conducive for the quick bowlers also if they hit the deck hard .Whoever wins the toss should look to bat first on this track.

Skipper Adam Lyth is consistent at the top of the order scoring 297 runs in 7 innings at an average of 42 with a strike rate close to 160. He has shown his ability with the ball also picking up 3 wickets at an economy of 6 runs per over.

Joe Root with this all round performance has been impeccable scoring 218 runs in just 4 innings at an average of 54.50 which includes three half-centuries. With the ball he has picked up 6 wickets at economy of 6.4.

Dawid Malan No. 1 T20I batter yet to deliver big scores in this tournament. He just managed to score 27 and 8 runs in the last two matches. He will be all set to score big runs on Sunday.

Matthew Critchley is the main performer for Derbyshire, scoring 154 runs at an average of 22 with a decent strike rate of 112. Also, he has picked up 4 wickets at an economy of 7.9.

Wayne Madsen has scored 169 runs at an average of 24 with a strike rate of 138, also with the ball he picked 2 wickets at an economy of 7.

Suggested Playing XI No.1 for DER vs YOR Fantasy Cricket: 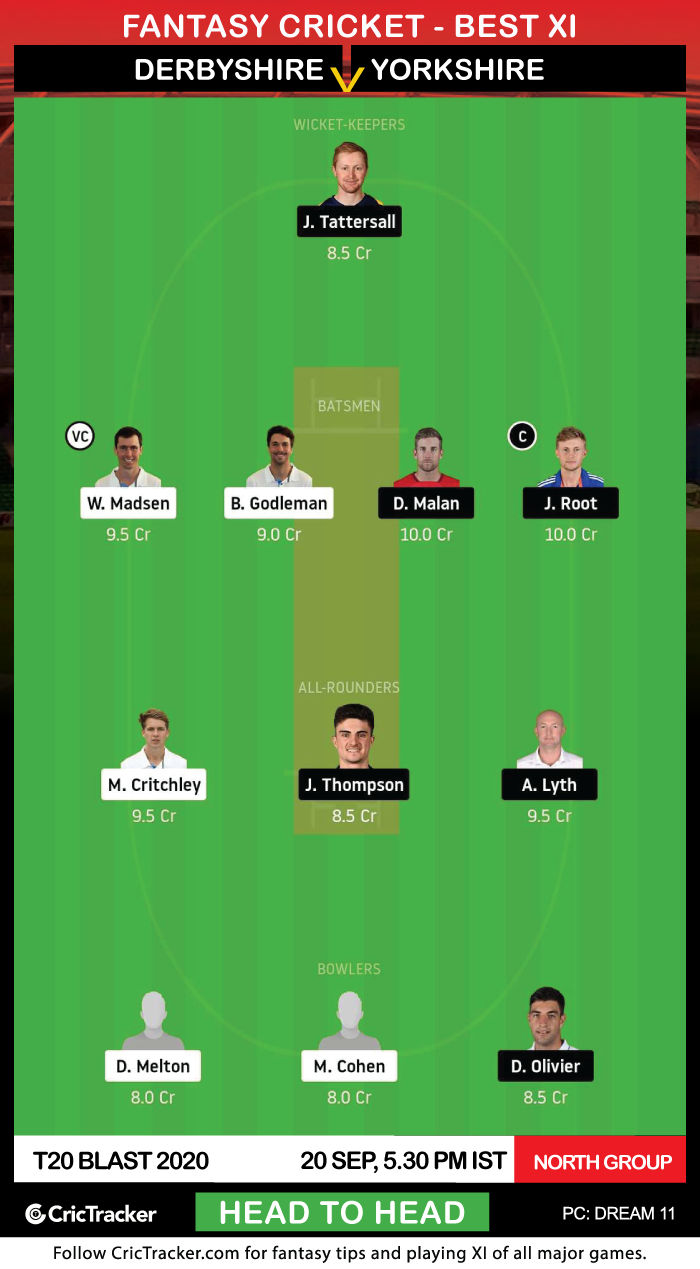 Suggested Playing XI No.2 for DER vs YOR Fantasy Cricket: 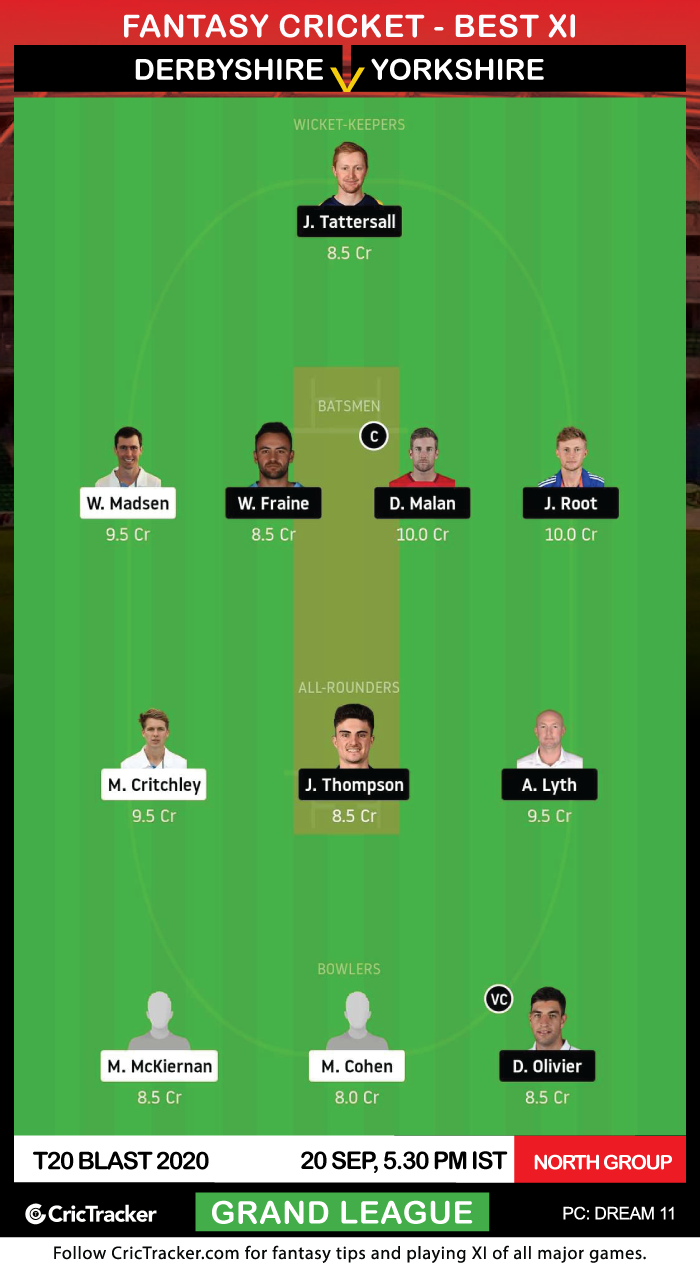 Joe Root is performing well for Yorkshire. In their last match against Lancashire he scored 64 runs with the bat and also picked 2 crucial wickets with the ball. He should lead your fantasy Dream11 team.

Yorkshire are expected to win this match.