Kamrul Islam Rabbi registered his career-best figures of 5/24 from the nine overs he bowled in the previous game.

The Prime Doleshwar Sporting Club kick started the DPDCL 2019 with back to back wins before suffering a close loss. They cruised to a 9-wicket win against Shinepukur CC and chased down 302 against the Prime Bank Cricket Club. However, the PDSC went down in a last-ball thriller against Mohammedan Sporting Club in the previous game by a 1-wicket margin.

Chasing a target of 249, Mohammedan needed three runs from the last over with one wicket in hand. Arafat Sunny conceded only one run in first five balls before getting hit for a boundary on the final ball. They will now face the Gazi Group Cricketers who started with a defeat against Mohammedan. Gazi defeated Bangladesh KSP and Khelaghar SKS in their next two games.

The 22nd game of the Dhaka Premier Division Cricket League 2019 will be played between Prime Doleshwar Sporting Club and Gazi Group Cricketers at the Sher-e-Bangla National Stadium in Mirpur, Dhaka.

The Mirpur track has witnessed scores under 250 by teams batting first. The last three games recorded scores between 225 and 250. It could be the same during the game between Prime Doleshwar and Gazi Group.

Abu Jayed Chowdhury returned from Bangladesh’s tour of New Zealand. He is expected to be part of the Prime Doleshwar SC’s playing XI for this game.

Kamrul Islam Rabbi is a proper wicket-taking option that any team would like to have in the limited-overs. The pacer has 103 wickets to his name from 69 List A matches. He claimed nine wickets from three games as his bowling figures read: 5/24, 2/52 and 2/19.

The Prime Doleshwar SC skipper Farhad Reza has been exceptional with both bat and ball. He has to be a must pick as captain or vice-captain. Saif Hassan too has been brilliant with the bat in this tournament. The all-rounders Parvez Rasool, Shykat Ali and Mahedi Hasan could make a difference in both departments on their day. Kamrul Islam Rabbi and Shamsur Rahman can be picked as vice-captain. 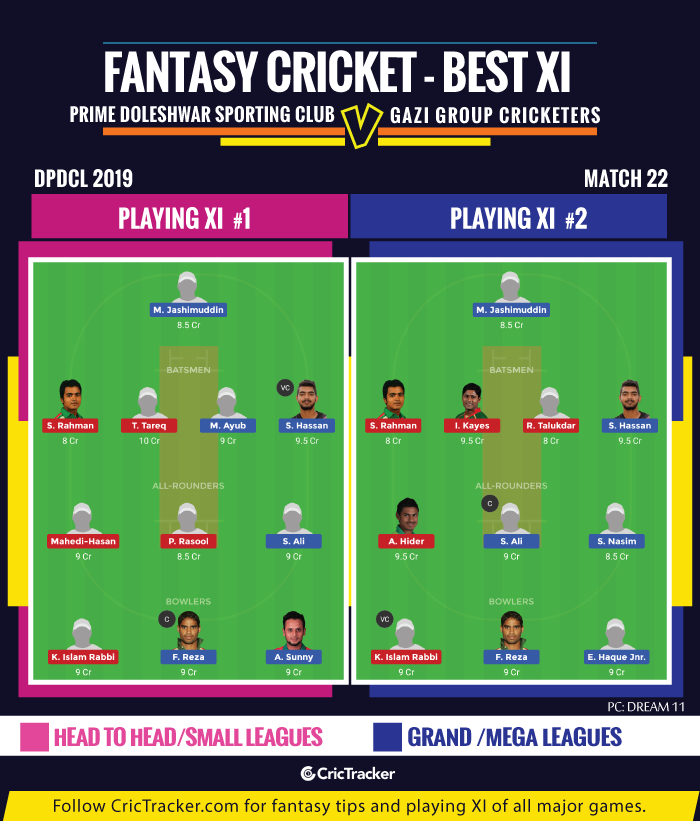 The Gazi Group openers Rony Talukdar and Imrul Kayes have been quite poor in the tournament as the duo together aggregate 32 runs across the three matches so far. The seam-friendly pitches didn’t help the duo to score a few runs. Abu Jayed Chowdhury is expected to be part of the PDSC’s playing XI but has not been included in the Dream11 player list yet.