Yasir Ali of the Brothers Union has aggregated 203 runs across three games at an average of 203.

Brothers Union and Uttara Sporting Club, the two teams that are aiming to find consistency in the tournament, have lost two of their first three matches. The Brothers Union were defeated by Legends of Rupganj in their first game in a last over thriller. They bounced back with a 7-wicket win against Sheikh Jamal DC but went down by 12 runs to the Abahani Limited. Yasir Ali of the Brothers Union has 203 runs across three games at an average of 203.

The Uttara SC, on the other hand, won their first game against Sheikh Jamal DC by a narrow 9-run margin. Later, they suffered a massive 189-run defeat in the game against Abahani Limited and followed it with a 20-run loss to Bangladesh KSP. None of their players aggregated 100 runs after first three games and that shows the inconsistency in their batting line-up thus far.

The 24th game of the Dhaka Premier Division Cricket League 2019 will be played between Brothers Union and Uttara Sporting Club at the Bangladesh Krira Shikkha Protisthan No 3 Ground in Savar.

The Savar track continued his inconsistency producing a 300+ total on Tuesday during the game between Prime Bank CC and Sheikh Jamal DC. The venue had three games with 300+ totals while in three other games, the team batting first bundled out under 200.

The BPL T20 2019 can be considered as a breakthrough tournament for Yasir Ali who performed well for the Chittagong Vikings. The middle-order batsman has carried his form to the DPDCL as he aggregated 203 runs from three innings. Yasir’s scores in the tournament thus far read 65, 32*, 106*. 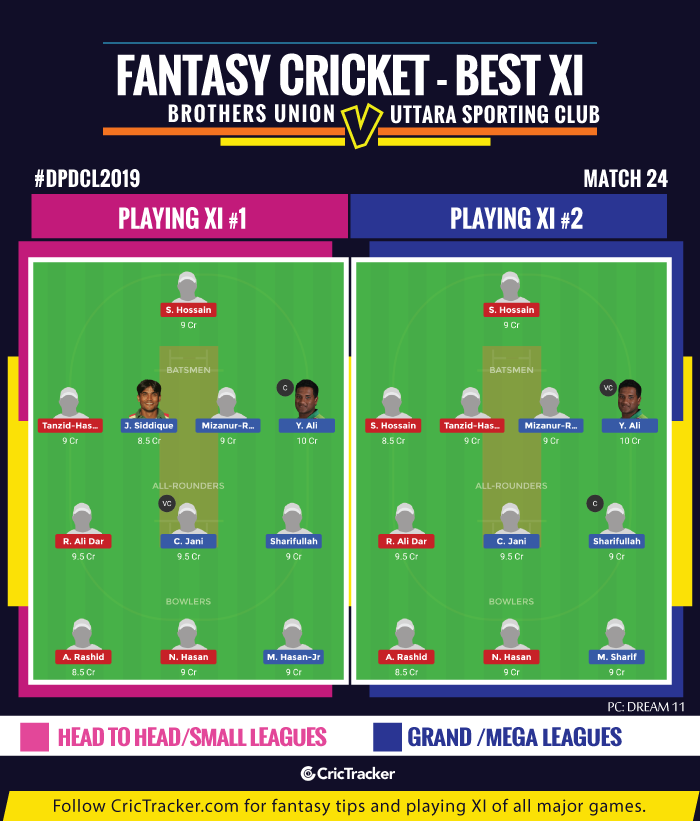 Junaid Siddique can be ignored among the batters category given his scores in the tournament. However, he could be dangerous if he replicates his BPL 2019 exploits on a belter in Savar.

The Brothers Union is expected to sneak past the Uttara Sporting Club for registering their 2nd win of the tournament.