Does the postponement of the T20 World Cup mean the end of the road for MS Dhoni?

Does the postponement of the T20 World Cup mean the end of the road for MS Dhoni?

Dhoni has not divulged any plans about his future in the game and has maintained a mystifying silence. 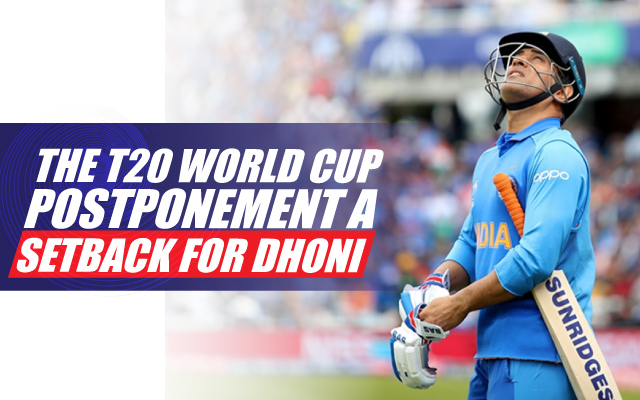 There is a cloud of mystery that envelops him very tightly, and it has increased with every passing year. And even today, nobody can predict what his next move is. Ever since that heartbreaking run out against New Zealand in the semi-final of the 2019 World Cup on July 10th that shattered the hopes of the nation, Mahendra Singh Dhoni has gone on a sabbatical from international cricket.

Former cricketers have had their opinion on Dhoni’s retirement, experts have had their say and people have endlessly speculated only to receive just one response from the man.

Dhoni has not divulged any plans about his future in the game and has maintained a mystifying silence.

But then, if we have to confront the truth head-on, Dhoni might have well played his last match for his country on 10th July 2019. Not that Dhoni does not want to play anymore, even if he does want to, he might not fit into the ‘scheme of things’ from here on.

The waning powers of the Legend

Father Time is a very tricky customer to deal with. And, it raises its deadly hood when an athlete enters the wrong side of 30. And, there has been little doubt that Dhoni’s famed finishing abilities are on the decline now.

He finds it difficult to force the pace, and clearing the fence is not as easy as it used to be for him around a decade ago. In fact, even in the 2019 World Cup, Dhoni was unable to up the ante. In the game against minnows Afghanistan, the legend scratched his way to a laborious 52 ball 28. Also, even in the high profile semi-final against New Zealand, Dhoni’s strike rate was less than 70, when the required run rate was mounting up with every passing delivery.

The emergence of KL Rahul

The concussion that Rishabh Pant suffered during the ODI series against Australia in January this year allowed another man to stake his claim as the ‘keeper-batsman’ for the side. KL Rahul has been in fabulous form in limited-overs cricket and may well have sealed the place of the wicketkeeper-batsman in the Indian side.

The Karnataka batsman averaged 70.00 in the 6 ODIs that he played this year, and even in the T20 format, Rahul averaged 53.83 and scored 3 fifties in the 6 innings that he played in 2020. He opened the batting, was then floated around in the middle order, and even came in at the fag end of the innings in a few games. And, in every role he excelled.

And now, he is undoubtedly the first choice for the role of wicketkeeper-batsman for his side.

The T20 World Cup postponement a setback for Dhoni

Probably Dhoni would have expected to have one final hurrah in international cricket by signing off after playing the World T20 this year. But then, in a major setback for the icon, the ICC announced that the T20 WC is not slated to take place this year and has been postponed to October next year. This has virtually dealt a death knell for Dhoni, who will be above 40 by the time the tournament will get underway.

And, this would mean that it would virtually be impossible for Dhoni to make a comeback into the national side and stay in contention for a place in the Indian side.

And, this might well mean that the sun has set on the career of one of India’s greatest sporting sons ever. Yes, Dhoni has made a career out of doing the impossible, but it might be beyond the great man to play another game for his country from here on.

Can Dhoni script another fairy tale from here on?

Well, the chances are close to zero.

Note: All stats are taken from Howstat cricket and have been updated as on 21st July 2020