The 12th match of the CSA T20 Challenge 2021 will be played between Dolphins and Lions at the Hollywoodbets Kingsmead in Durban.

The match will start at 6:00 PM (2:30 PM local time). The live streaming of the match will be available on Hotstar’s app and website.

As the CSA T20 Challenge 2021 moves towards the end of the league stages, each of the matches become crucial for both teams. When Dolphins will take on Lions in the 12th match of the match, a lot of eyeballs will be looking at this match. The result of each and every match will play a role in each and every team’s final standings. Dolphins have had an absolute gem of a tournament so far. They haven’t lost a single match so far and have looked extremely good playing at their home ground.

Lions, on the other hand, haven’t lost a single match either. They have had some scares in both their matches, but mostly it has been smooth sailing for them. As they meet Dolphins, they will hope to continue their winning momentum. This just could be the first match between these two teams as both teams are likely to go through the next round.

The right-handed batsman has been in top form for his franchise in this year’s competition. In the two matches, which he has played he has scored 101 runs and has been dismissed only once. His strike rate has been 156 and his highest score came in the first match when he scored 64 runs. He has been in a good batting knick since the time he was playing international cricket and given that he will be up against a good Dolphins’ team, it will be interesting to see whether can continue his good batting form.

In the season when Dolphins’ team has collectively performed well and got the results, Zondo has been one player who has scored runs whenever asked out of. In the three matches, Zondo has batted only twice, scoring 94 runs in total. These runs include brilliant innings of 59 in the first match. His strike rate has been good as well, standing at 134.28. Zondo’s batting form will be crucial for the Dolphins if they want to go on and win the tournament. 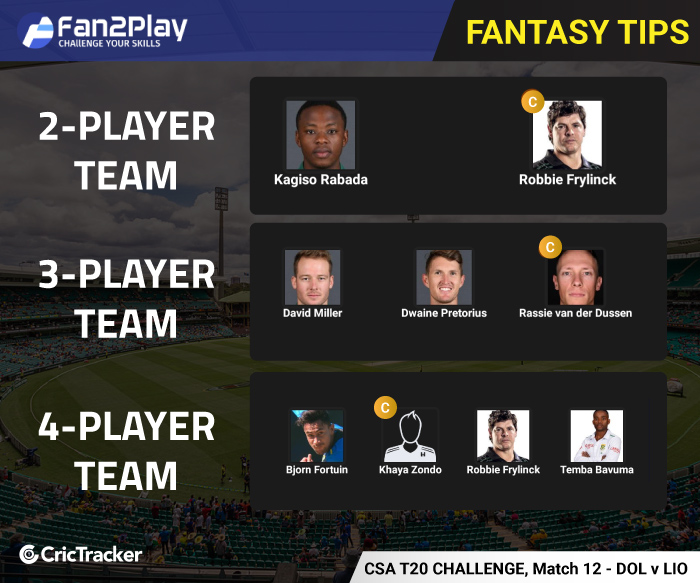