Check it out whether Rohit Sharma makes up to our classic fantasy league team.

The official fantasy league of Indian Premier League (IPL) steps back to the old model of allowing changes every day instead of dividing the league phase into rounds. There will be a total of 47 match days during the league stage allowing us to make changes for both the matches during a doubleheader day before the start of afternoon game. A total of 110 transfers available for these 47 matches which means at an average of two changes per matchday can be made.

The Kolkata Knight Riders do not appear across the first four matchdays of the league phase and hence their players can be skipped for now. On the other hand, CSK and MI, who play the tournament opener on Saturday, will be part of two matches across the first five matchdays.

To pick Rohit or not in MI vs CSK IPL match?

Spinners have been a bigger threat to Rohit Sharma in the recent IPL seasons. However, on Saturday, Imran Tahir and Piyush Chawla could be the primary spinners of CSK. Against the two players, Rohit has collected 225 runs in the IPL and has been dismissed once each against them. His record against Dwayne Bravo is a middling one but the Caribbean all-rounder might not bowl due to knee injury.

Deepak Chahar has dismissed Rohit twice with the new ball in the previous two meetings. But lack of help from the pitch at Sheikh Zayed Stadium might help Rohit to get away against the likes of Chahar and Lungi Ngidi. With MI’s second match to be played against KKR, one of Rohit’s favourite opponents in the league, the opening batsman could be seen getting a good start to the tournament.

The KeJa factor in MI vs CSK today’s IPL match

In the absence of Suresh Raina and Ruturaj Gaikwad, the all-rounder Kedar Jadhav could be seen batting at No.4 or No.5. Moreover, in Jadhav, Dhoni could see a useful off-spin option in the absence of Harbhajan Singh. No player other than Jadhav in the CSK line-up can bowl proper off-spin which could mean a safe passage to left-handers Quinton de Kock, Ishan Kishan and Krunal Pandya against the trio of Tahir-Jadeja-Chawla.

Is Hardik worth the captain role?

Hardik Pandya could be a worthy option as captain on the UAE pitches where he could chip in wickets at regular intervals. However, Hardik, who is coming off an injury, might not get enough overs with the ball. Hence, picking him as the captain could turn risky if the team management likes to preserve the all-rounder.

The likes of MS Dhoni, Shreyas Iyer and Manish Pandey have been picked in our fantasy team due to their record last year. Shane Watson has an impressive record in UAE and makes it directly into our league. Moreover, we expect Jasprit Bumrah to pick wickets on the first day of the tournament. 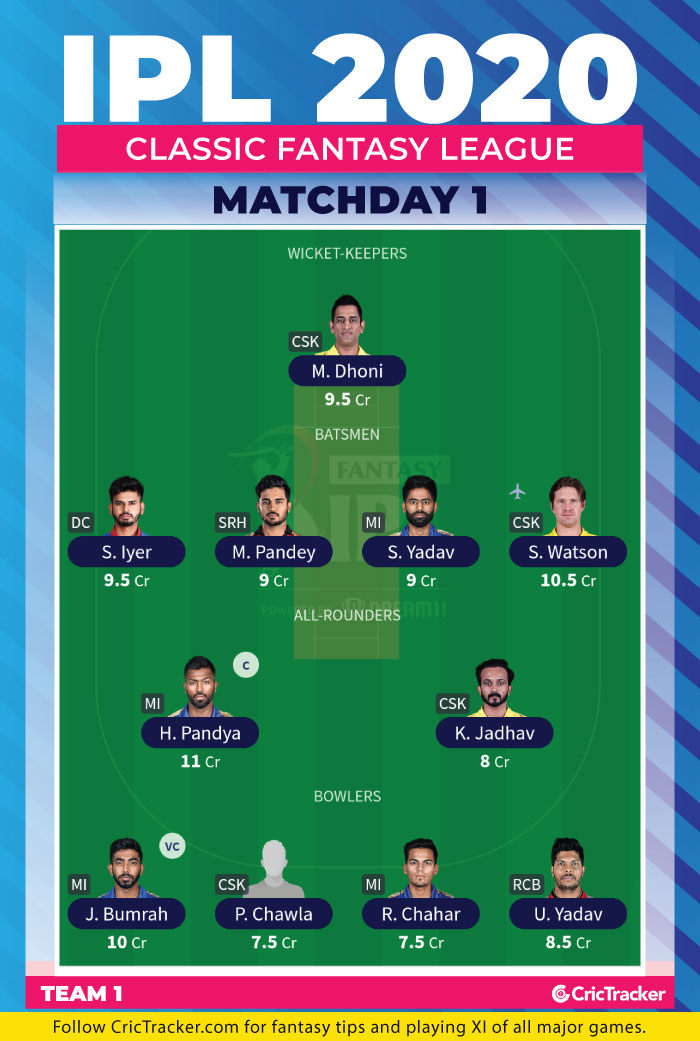 The likes of Harshal Patel and Bhuvneshwar Kumar have been trusted to come off good in slower conditions of UAE. Mayank Agarwal’s game against spin bowlers has always been on top-notch which is why he is going to be a dangerous batsman for the King XI Punjab this season alongside KL Rahul. 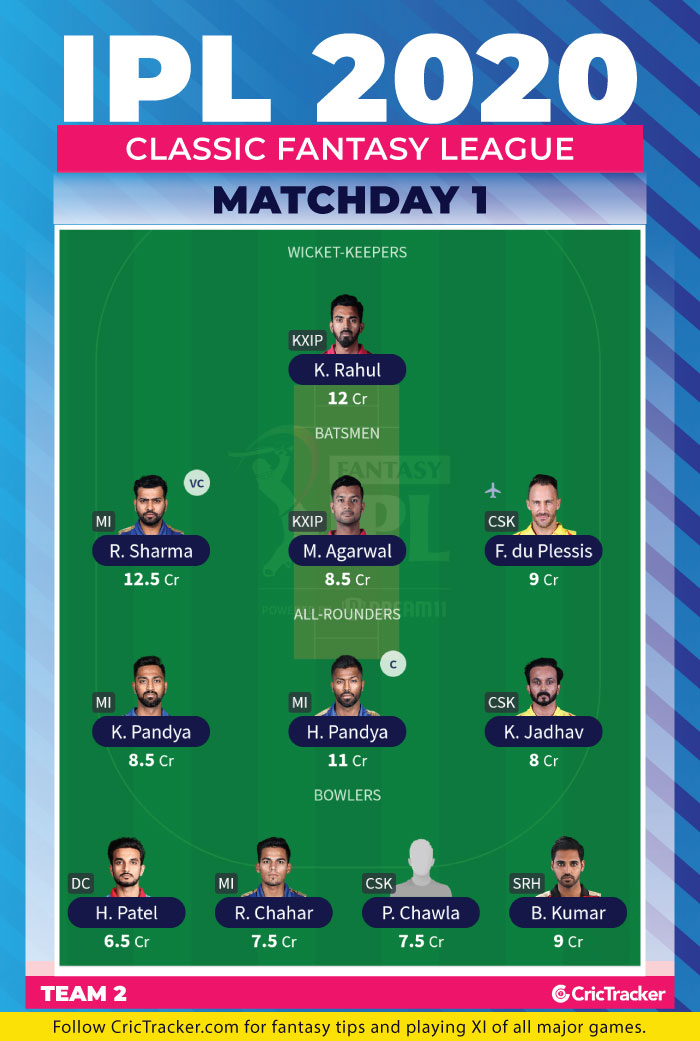