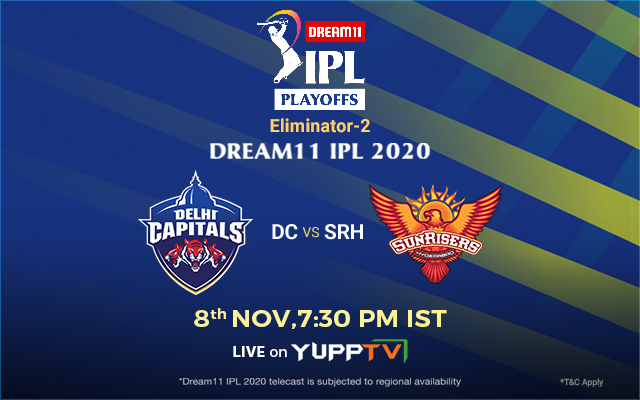 After a spectacular Qualifier-1 and Eliminator match, IPL 2020 is down to three teams that will be competing for the Trophy. Mumbai Indians the strongest of them all defeated Delhi Capitals in the Qualifier-1 and secured its position in the finals for the sixth time in the IPL history. Sunrisers Hyderabad competed against the Royal Challengers Bangalore in the Eliminator match and won that battle to fight Delhi Capitals in the Qualifier-2. The Qualifier-2 will decide who is going to face Mumbai Indians in the Dream11 IPL 2020 Final on 10th November 2020.

The thrilling ride called IPL 2020 has given us more than a necessary distraction from the uniquely terrifying events of 2020. 8 teams competed for a month and a half and provided us with nerve-wracking matches that could not get more exciting. Super Overs, Double Super Overs, Last ball victories, CSK being unable to enter the playoffs, these are just some of the elements that describe IPL 2020.

After a spectacular journey through the leagues, 4 teams namely Mumbai Indians, Delhi Capitals, Sunrisers Hyderabad, and Royal Challengers Bangalore entered the Playoffs to compete for a place in the finals. Among these teams, Delhi Capitals, being the second in the points table, lost the match against Mumbai Indians in the Qualifier-1, but still has a chance in the Qualifier-2. RCB lost the match against SRH and retrieved from the race. Sunrisers Hyderabad now has to compete against Delhi Capitals to enter the finals and the match is going to take place on 8th November 2020, in Sheikh Zayed Cricket Stadium, Abu Dhabi.

Sunrisers Hyderabad had a rough ride in the IPL 2020 but still managed to make it to the playoffs with a tremendous victory against the top team Mumbai Indians in the last league match. The team’s place in the playoffs was not confirmed till the last match since it was stuck at 12 points until then. Miraculously, SRH managed a stupendous victory and climbed up to 3rd place replacing Kolkata Knight Riders who accrued the same number of points.

The team’s performance in the last two matches i.e., the last league match and the Eliminator match was nothing short of amazing. A 10-wicket victory against the table topper is no ordinary feat and competing against a team like RCB in the Eliminator match and securing a victory under the pressure was incredible. If it manages to perform with the same confidence, it might enter the finals again the fourth time.

What about Delhi Capitals?

Delhi Capitals under the leadership of Shreyas Iyer performed well in the tournament and ended up at the second position on the points table. The team had its ups and downs but still managed to stand its ground. Though it had lost its chance against MI in the Qualifier-1, there is still a chance for the team, and it is highly doubtful that it will let go of this opportunity.

Delhi Capitals ended up 3rd in IPL 2019 by defeating Sunrisers Hyderabad in the Eliminator match. but in 2020, the team had lost both the league matches against SRH and there is a good chance that the team is looking to have its revenge. But this does not makeup to the fact that the team is walking into the Qualifier-2 match with a handful of defeats in the previous 5 matches among 6 it had played. Will the team be back on its feet and secure a victory? Only time will tell.

Watch the highly unpredictable super exciting Qualifier-2, Sunrisers Hyderabad vs Delhi Capitals Live on YuppTV in Full HD from select regions. You can subscribe to any of the yearly packs to watch Qualifier-2 and Dream11 IPL 2020 Final for Free on YuppTV.