Ritesh Khanna will open the batting for the Barracudas and is known for his big-hitting skills. 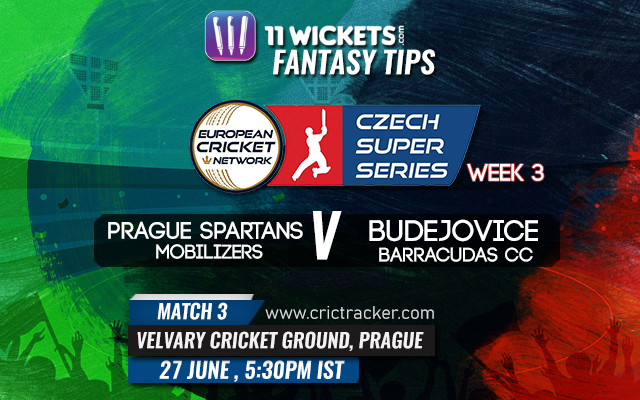 The 3rd match in the Week 3 of 2020 ECN Czech Super Series T10 will be played between Prague Spartans Mobilizers and Budejovice Barracudas CC at the Scott Page Field in Prague.

Budejovice Barracudas CC will kick start their campaign in the ECN Czech Super Series T10 as they face Prague Spartans Mobilizers in the match scheduled to Prague Spartans Mobilizers will complete their set of Saturday’s matches as they will be part of the game against Prague CC Rooks in the morning. On the other hand, Budejovice Barracudas CC will play back to back games in the evening as they face the Prague Barbarians Vandals after the game against the Mobilizers.

The game between Mobilizers and Barracudas is expected to get completed without any interruptions.

Scott Page Field, which hosted the Week 1 of the Czech Super League, had an average first-innings total of 75 across the five unaffected matches. The same trend is expected during the tournament starting this Saturday.

Ritesh Khanna will open the batting for the Barracudas and is known for his big-hitting skills. Ritesh is also a pretty good fast bowler and makes it tough for the opponents. Arman Bhuiyan is known to swing the ball both ways and also provide perfect acceleration for his team down the order.

Praveen Kumar Muthusamy costs nine credits in the category of the bowlers. He is a reliable bowler and has picked up five wickets across seven domestic games. Suresh Babu Kuramboyina, the captain of Spartans Mobilizers, has claimed 20 wickets in the Czech domestic T20 games at an economy of six.

As only a maximum of three players are permitted from the category of all-rounders, we had to skip from picking Ajay Mishra. We need as many players as possible who have got the extra ability of bowling and picking up wickets.

Budejovice Barracudas CC could well start their campaign with a victory.