Jan Hoffmann batted in 28 domestic innings where he piled up 662 runs at an average of 28.7. 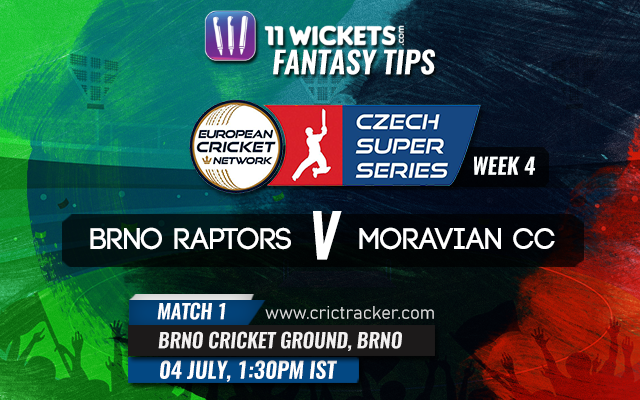 The 1st match in the Week 4 of 2020 ECN Czech Super Series T10 will be played between Brno Raptors and Moravian CC at the Brno Cricket Ground in Brno.

Brno Raptors and Moravian CC will clash off in the first match of the Week 4 in the Czech Super Series. This will be the last round in Czech Super Series before finals round later next week. Varun Mehta will be leading the Raptors which has got Jan Hoffmann, Sureshkumar Nagaraj, Sudeep Roy and Sandeep Naidu in their squad. Vineesh Njarekkattil, Sunil Ambar, Felix Irudayadhasan and Jobi Samuel feature in the Moravian CC line-up who have the experience of playing Czech domestic cricket.

The first match of this round will be played under clouds but no rainfall is forecasted.

The 3rd Week of Czech Super Series T10 put an end to low-scoring matches in the tournament. Hence, we can expect the 4th week to produce heavy totals with the Brno Cricket Ground shortening the boundaries.

Jan Hoffmann batted in 28 domestic innings where he piled up 662 runs at an average of 28.78 with help of two fifties. Vineesh Njarekkattil has picked up seven wickets across the nine domestic matches he was part of in Czech Republic.

Sureshkumar Nagaraj has 25 wickets to his name across 36 domestic matches where he also scored a total of 313 runs. Felix Irudayadhasan has picked up 14 wickets in the 11 domestic games he has featured in thus far at a strike rate of 15.

Brno Raptors have a lot of players with experience of playing domestic cricket compared to Moravian CC. Hence, we have preferred more players from the Raptors especially from the categories containing batters and all-rounders for the grand league team.

Brno Raptors are expected to register a comfortable win over the Moravian CC.