Sandeep Tiwari bowled four overs for his two wickets on Saturday where he conceded only 18 runs. 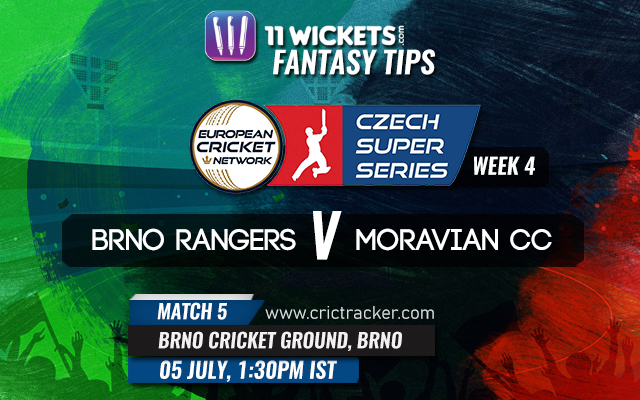 The 5th match in the Week 4 of 2020 ECN Czech Super Series T10 will be played between Moravian CC and Brno Rangers at the Brno Cricket Ground in Brno.

Moravian CC and Brno Rangers will clash off in the Sunday’s morning match of the Week 3 in Czech Super Series. Both the teams had contrasting start to their campaigns. The Rangers team won both their matches on Saturday – by 17 runs against Raptors and by 5 wickets against Raiders. On the other hand, the Moravian CC have recorded totals of 27 and 55 in the two matches against Raptors and Raiders respectively where they ended up on the losing side.

The Sunday’s morning match will be played under clouds but no rainfall is forecasted.

The Brno Cricket Ground has been tough for the batsmen on Saturday as only one total of 75+ runs was recorded across four matches. Chasing anything over 75 doesn’t seem to be easy in this tournament.

Tripurari Kanhya Lal took three wickets conceding 22 runs in the four overs he bowled and also scored 11 runs without being dismissed. Sandeep Tiwari bowled four overs for his two wickets on Saturday where he conceded only 18 runs.

Anil Paul Chirackal Manavalan claimed a 3-wicket haul in the tournament opener and gave away only 8 runs across two overs in the following match. Naveed Ahmed, the captain of Rangers, conceded 25 runs in the four overs he bowled and also picked up a wicket.

The profile of Dhanushka Sandaruwan seems to be matching with a cricketer in Sri Lanka domestic cricket who is also an all-rounder. Sandaruwan played one match on Saturday where he scored 12 runs from five with a six and four.

Brno Raptors are expected to finish the league phase without a defeat.