Sandeep Naidu picked up as many as four wickets with help of a 3-wicket haul across the two matches. 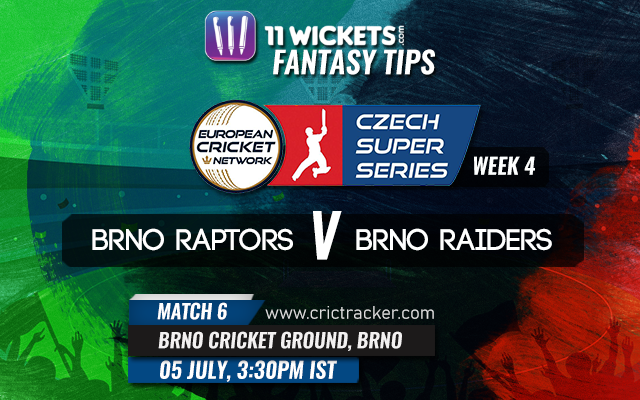 The 6th match in the Week 4 of 2020 ECN Czech Super Series T10 will be played between Brno Raptors and Brno Raiders at the Brno Cricket Ground in Brno.

Brno Raptors and Brno Raiders will lock horns in an interesting battle on Sunday which will conclude the league matches of the 4th week in the ECZ Czech Super Series T10. Both the teams made a winning start over the Moravian CC team before going down against the Rangers on Saturday. This match will be a warm-up for Raptors and Raiders as they will clash off in the Eliminator Final irrespective of the result if the Rangers win over a weak Moravian CC team.

The match between Brno Raptors and Brno Raiders is unlikely to be affected by rain.

The Brno Cricket Ground is likely to witness low-scoring matches on Sunday just like it was on Saturday. It can be said that the batting line-ups of the teams involved in this round have been the cause for low scores.

Sandeep Naidu picked up as many as four wickets with help of a 3-wicket haul across the two matches on Saturday while giving away only 16 runs. Aamir Husain scored 38 runs including a best score of 32 on Saturday. He bowled 2.2 overs and ended up with two wickets at an economy rate of six.

Arunkumar Vasudevan took the most wickets for the Brno Raiders thus far. He bowled four overs on Saturday and ended up with three wickets at the cost of 27 runs. Raghvendra Singh gave away 17 runs in the two overs he bowled on Saturday but took two crucial wickets.

It was the bowlers who dominated the proceedings on Saturday. Hence, we can expect the same to repeat on Sunday and can pick players who are likely to bowl their two overs. Their batting can be considered as a bonus.

Brno Raptors are expected to hold an edge against the Brno Raiders due to their balanced line-up.