Rajan Sharma was in excellent form with the ball and made occasional contributions with the bat too in the domestic T20 matches. 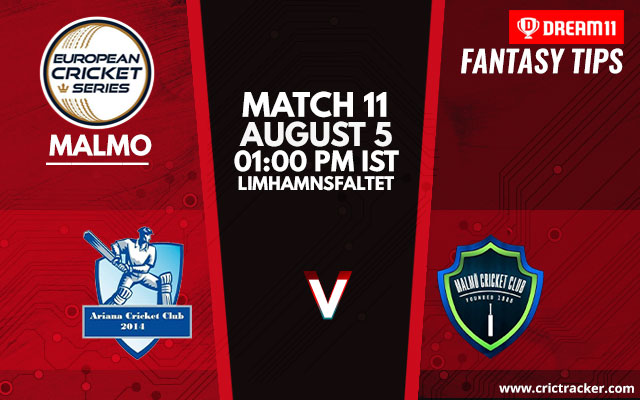 The 11th match of the European Cricket Series T10 in Malmo is all set to be played between the Ariana Cricket Club and the Malmo Cricket Club at the Limhamnsfaltet Cricket Ground.

The Group B matches are set to commence in the ongoing ECS Malmo T10 with match 11 of the tournament to be played between Ariana CC and Malmo CC. The first two days of the tournament saw two semi-finalists being finalised from Group A. Both the teams will be looking to start their campaign on a high as there is very little room for improvement.

The overcast skies are likely to welcome the teams on Wednesday with the temperatures expected to be around 16 Degrees Celsius.

The matches played on the second day saw teams crossing the 100-run mark thrice. Expect the trend to continue on the third day.

Bilal Zaigam was the top performer for his team, the Malmo Cricket Club in the T20 matches that his team played this season. In his career in the domestic circuit, he has 453 runs to his name with a strike rate of 114.11 and has got two wickets to his name in 18 matches that he has been a part of. Following him on the list of top performers for the team in the 2020 season is Saqlain Karamat, who has scored 145 runs and taken 20 wickets in the 22 domestic T20 matches that he has played.

Rajan Sharma was in excellent form with the ball and made occasional contributions with the bat too in the domestic T20 matches. But, he has been picked in just 24.76 per cent of teams at the time of writing. He is a player who must be picked in the fantasy team, as he can potentially grab you some valuable points for a 9 point investment.