Arifullah Khawari can be made captain of the team in this match. 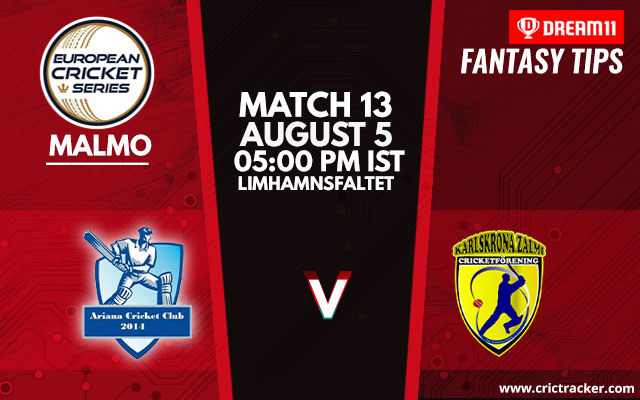 The 13th match of the ECS Malmo T10 between Karlskrona Zalmi Cricketforening and the Ariana Cricket Club will be played at the Limhamnsfaltet Cricket Ground.

Playing their first match of the tournament on Wednesday will be the Group B team Karlskrona Zalmi Cricketforening. Their opponents, the Ariana Cricket Club will already have the experience of playing one match on Wednesday morning against Malmo Cricket Club.

Both the teams, given the format of the tournament, which allocates 4 games to each team in the league stage, before the top teams from the group go on to play the semis, will try to get a win in this match and better their cases of qualification stronger on the very first day of their group’s matches.

Overcast conditions with no chance of rainfall will prevail on Wednesday. The temperature will be in the 15 to 19 degree Celsius.

The pitch at the Limhamnsfaltet Cricket Ground in this tournament has had a lot in store for the bowlers to work on. But still, the batsmen have managed to get past the totals they were tasked to chase on multiple occasions.

Nusratullah Sultan has the best record in the domestic T20 matches this season for his team and is expected to bring his A game into this tournament also. He has played in 13 matches and has scored 172 runs at a strike rate of 162.26 and has also taken 3 wickets.

Arifullah Khawari has been a sensational player for his team in 2020. He has played just 6 matches and has 113 runs to his name, alongside two wickets. He will surely make his presence felt whenever he will step on to the field in this tournament.

Adam Ahmadzay follows his teammate Nusratullah Sultan in his team’s top performers’ leader board. His performances with the bat in the recently concluded T20 tournament were noteworthy. In the 23 domestic T20 matches he has played so far, he has scored 345.

Muhammad Ayaz Hussain is also a new entrant in the scene, but he has made his mark on the stats sheets in just the 6 domestic T20 matches that he has been a part of, scoring 112 runs at a strike rate of 128.74 and taking 4 wickets too.

At the time of writing, Nusratullah Sultan, the top performer for the Ariana Cricket Club in the recent T20 competition, had been picked in just 11.63 per cent of teams. But, he has topped the charts for his team in this season and must be picked in your team.