Heera Lal is the best options for the captaincy.

The 53rd match of the ECS T10 2021 will be played between Hira Sabadell and Barna Royals on 22nd February at Montjuic Olympic Ground, Barcelona.

Hira Sabadell and Barna Royal will play against each other in Group B match of the ECS T10 2021 tournament on Monday. Barna Royals have played 3 matches, out of which they have won 2 and lost 1 match. They are currently placed at 2nd position in Group B, with 4 points.

On the other hand, Hira Sabadell have played 2 matches and have lost both the matches. They are at the last position in the Group B with zero points. It is a very important game for both the teams, but especially Hira Sabadell, because they will want to get their first points of the tournament.

HIS vs BAR Weather Report for Match 53:

Rain can interrupt the match. The temperature will range between 11 to 14 degrees Celsius and humidity levels are very high at 84 percent.

The last 2 matches played on this ground are won by the batting team first. So both the teams will look to defend targets.

HIS vs BAR Top Picks for Today’s Dream11 Match:

Hamza Azhar has scored the most runs in this tournament for Barna Royals, with a very good strike rate of 168.8. He is the opening batsman, so he will face most of the deliveries if he stays in the crease.

Heera Lal has scored 60 runs in 2 matches with the highest score of 49 and with a good strike of 158. He has been the best batsman for Hira Sabadell till now and he has taken 2 wickets in the tournament.

Waqas Anwar has taken 3 wickets from 2 matches with a very good economy of 4.75 runs per over, which is incredible in this format of the game.

Anwar Ul Haq took 3 wickets in 2 matches with the best figures of 3/15. He is the leading wicket-taker for Hira Sabadell.

Syed Gulraiz Hussain is the leading wicket-taker for Barna Royals with 4 wickets and best figures of 4/18 with an economy rate of 9 runs per over. 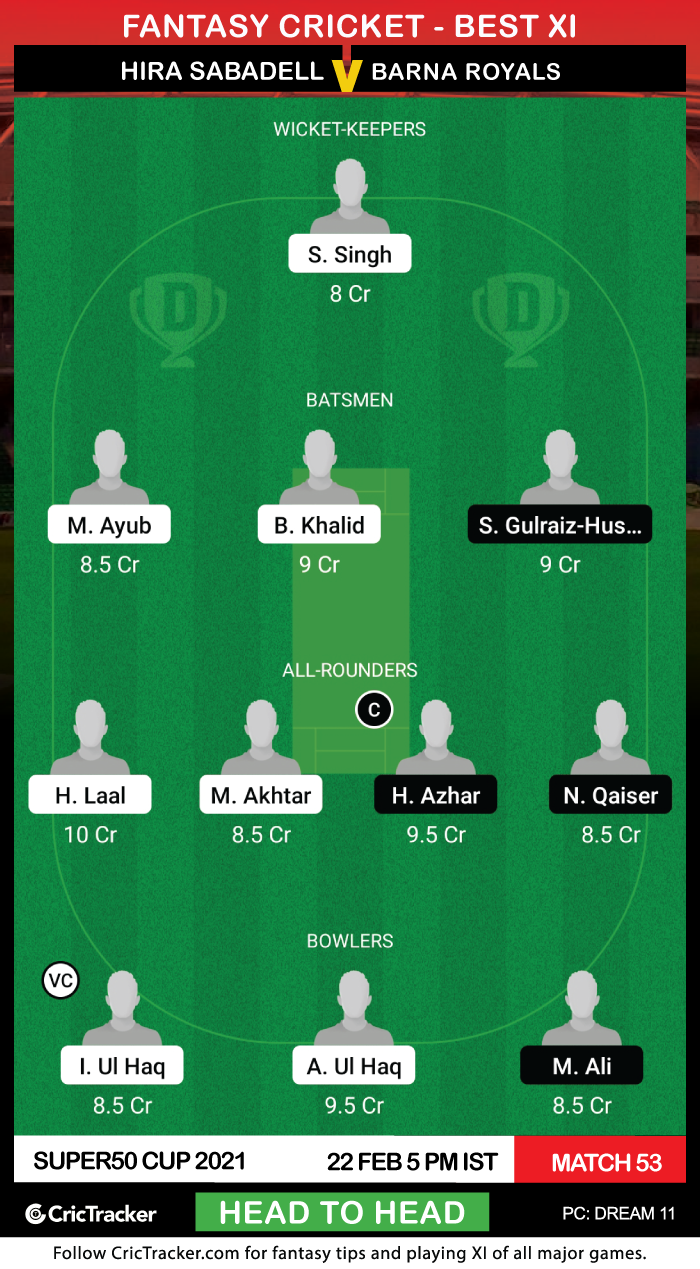 Today’s HIS vs BAR Probable Winners:

Barna Royals are expected to win the match.

Disclaimer : This team is based on the understanding, analysis and instinct of the author. While selecting your team, consider the points mentioned and make your own decision.