The 61st match of the ECS T10 2021 will be played between Pak I Care and Pakcelona on 24th February at Montjuic Olympic Ground in Barcelona.

The match is scheduled to start at 8:30 AM local time (1:00 PM IST) and it will be streamed live on Fancode.

In the Group B contest, Pak I Care and Pakcelona will go one on one against each other in the 61st match of the ECS T10 2021 on Wednesday. Pak I Care are having an excellent tournament so far in this competition having won their first 4 consecutive matches on the trot with convincing margins. Their previous match was washed out due to rain. Currently, they are at the top of the table in the Group B standings with 9 points and having a net run-rate of 4.609.

They have smashed three 100-plus scores in 4 matches which shows their strength in their batting line-up. They would look to maintain their winning streak against Pakcelona as well. On the other hand, Pakcelona didn’t have the greatest of first half in this tournament as they managed to win only one and ended up losing the other three matches.

They were outplayed by Pak I Care by 56 runs when they met last time. Not scoring runs at the required rate was the reason for their losses, but win against Barna Royals by 7 wickets had cheered them up a little. At present they are at 5th spot in the Group B standings with 3 points in their name and have got a huge task ahead of them to win the remaining matches if they want to qualify for the knockouts.

It will be partly cloudy in the morning with the temperature ranging between 12 and 13 degrees Celsius and the humidity levels are high at 82 percent. There is no chance of precipitation for this match.

If you have a good batting line-up this is the surface you must bat on, as there is nothing much for bowlers. Batters on any day can smack the ball out of the park unless it’s in their arc. Batting first is advisable on this surface.

Wicketkeeper Muhammad Ihsan is in some kind of form in this tournament and has helped his side to put huge runs on the board, and he is 3rd in the list of leading run-scorers with 188 runs in 4 innings at an average of 94 with a strike rate of with a whopping strike rate of 235.

Muhammad Amir Jafri has been impressive with the ball for Pak I Care with the most wickets for his side with 8 wickets in 4 matches at an economy of 5.62 with the best bowling figures of 3 for 11. Even with the bat, he has scored 38 runs at a strike rate of 190.

Mohammad Kamran is the most economical bowler for Pak I Care and has picked up 3 wickets in 4 matches at an economy of 5.42 with the best bowling figures of 1 for 7.

Shahzad Khan is the top batter for Pakcelona in this competition, he has scored 96 runs in 4 matches at an average of 32 with a strike rate of 168.42 and having the highest score of 44. With the ball he has picked up 3 wickets as well.

Muhammad Amir Raza has also had a decent tournament with the bat for Pakcelona, scoring 84 runs in 4 matches at a strike rate of 168 with the highest score of 34 and he has scalped 3 wickets at an economy of 5.57. 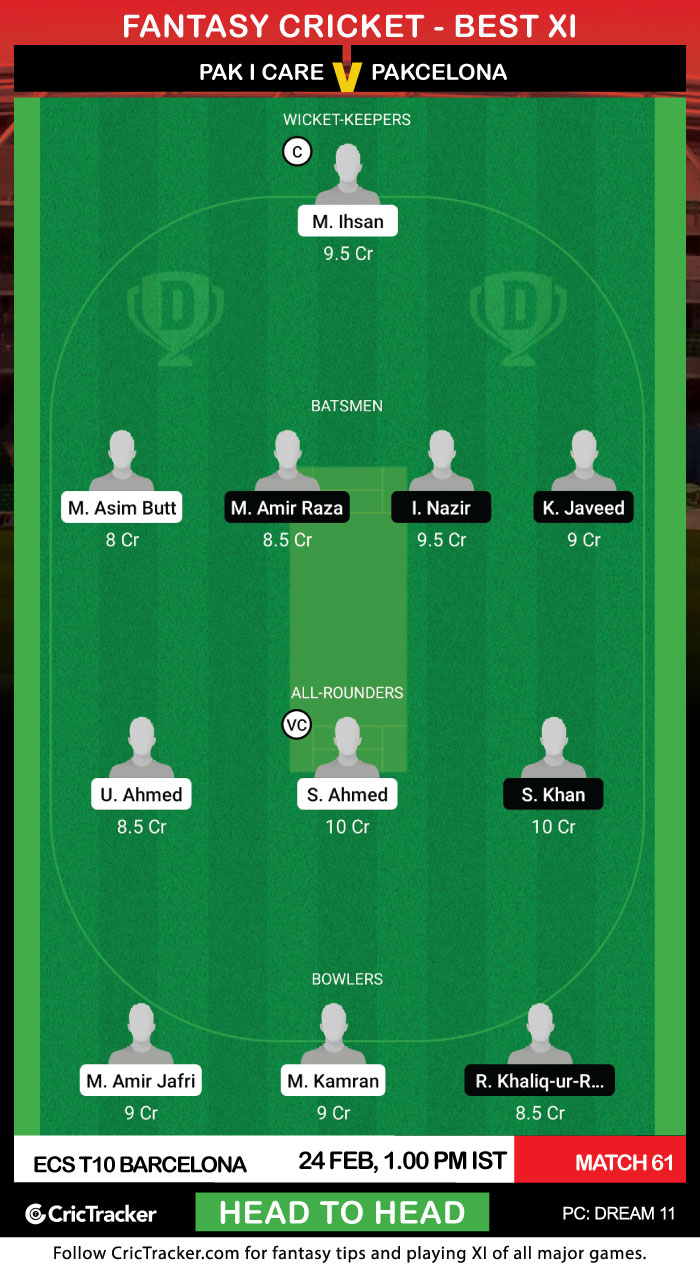 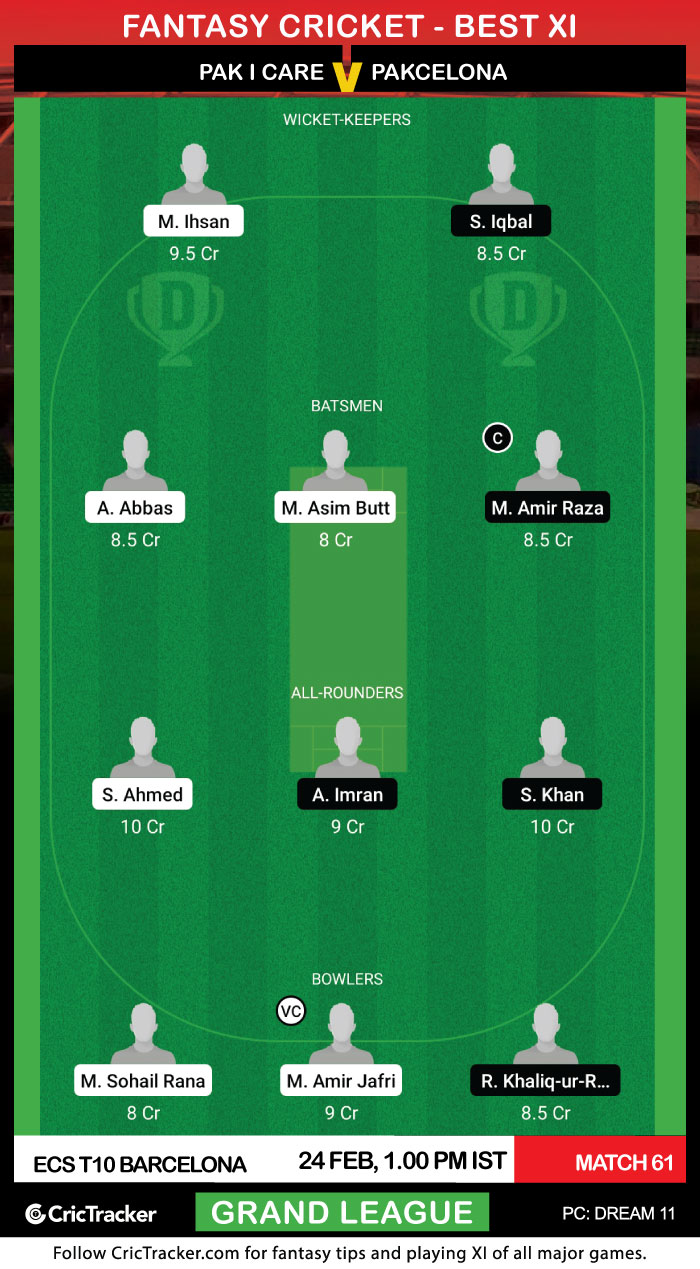 Muhammad Ihsan has had a good tournament with the bat so far for Pak I Care scoring close to 200 runs. He must be included in your Dream11 fantasy team and he is a suitable choice to lead the side.