Sofiqul Islam and Muhammad Masood have scored over 100 runs each for Bangladesh Kings. They are must picks for your Dream11 Fantasy team.

The 85th match of the ECS T10 2021 will be played between Kharian and Bangladesh Kings on 2nd March at Montjuic Olympic Ground in Barcelona.

The match is scheduled to start at 4:30 PM local time (9:00 PM IST) and it will be streamed live on Fancode.

In the Group C contest, Kharian will be up against the Bangladesh Kings in the 85th match of the ECS T10 2021 on Tuesday. Kharian has done an amazing job, considering that they are playing for the first time in the European Cricket Series. They started the tournament with a win against the Barcelona Gladiators by 7 wickets, but lost a couple of matches in a midway. However, they managed to win 2 matches as well, with 3 wins and 2 losses they currently are at the fourth spot in the Group C standings with 6 points and having a net run-rate of -0.375.

Meanwhile, Bangladesh Kings are not far away from the Kharian in terms of wins as they have won 3 matches in the first half as well, but Bangladesh Kings had the better of Kharian when they played last time. Bangladesh Kings lost their first match against Minhaj by 50 runs, but thereafter won 3 straight matches on the trot and showed glimpses of moving to the top of the table.

It will be cloudy throughout the day in Barcelona and in the evening it will be the same as well. The temperature will be around 14 degrees Celsius and the humidity levels are high at 75 percent. There is no chance of precipitation for this match.

Nothing much has changed about this artificial wicket. It still is a batting-friendly surface, and over the last 4-5 weeks, we have seen huge runs being scored. It’s hard for the bowlers on the receiving end, but if they bowl to the plans, they will be rewarded. Batting first is a good option on this wicket.

Kharian skipper Adeel Ahmed is leading from the front with the bat, having scored 122 runs in 5 matches at an average of 30.5 and a strike rate of 196.77.

Jahanzaib Asghar is a good pick for your fantasy teams since he has picked up the most wickets for Kharian in this competition, picking up 7 wickets in 5 matches at an economy of 10 runs per over, with the best figures of 3/8.

Sofiqul Islam has performed well with the bat for Bangladesh Kings, scoring 114 runs in 5 matches at a strike rate of 183.87, with the highest score of 48*.

Wicketkeeper Muhammad Masood is another Bangladesh Kings batsman who is scoring runs with the bat consistently. In 5 matches, he has scored 113 runs at a strike rate of 134.52, with the highest score of 56*.

Bangladesh Kings’ skipper Moshiur Rahman is the leading wicket-taker for his side picking up 5 wickets in 4 matches at an economy of 9.42 runs per over, with the best figures of 3/9. 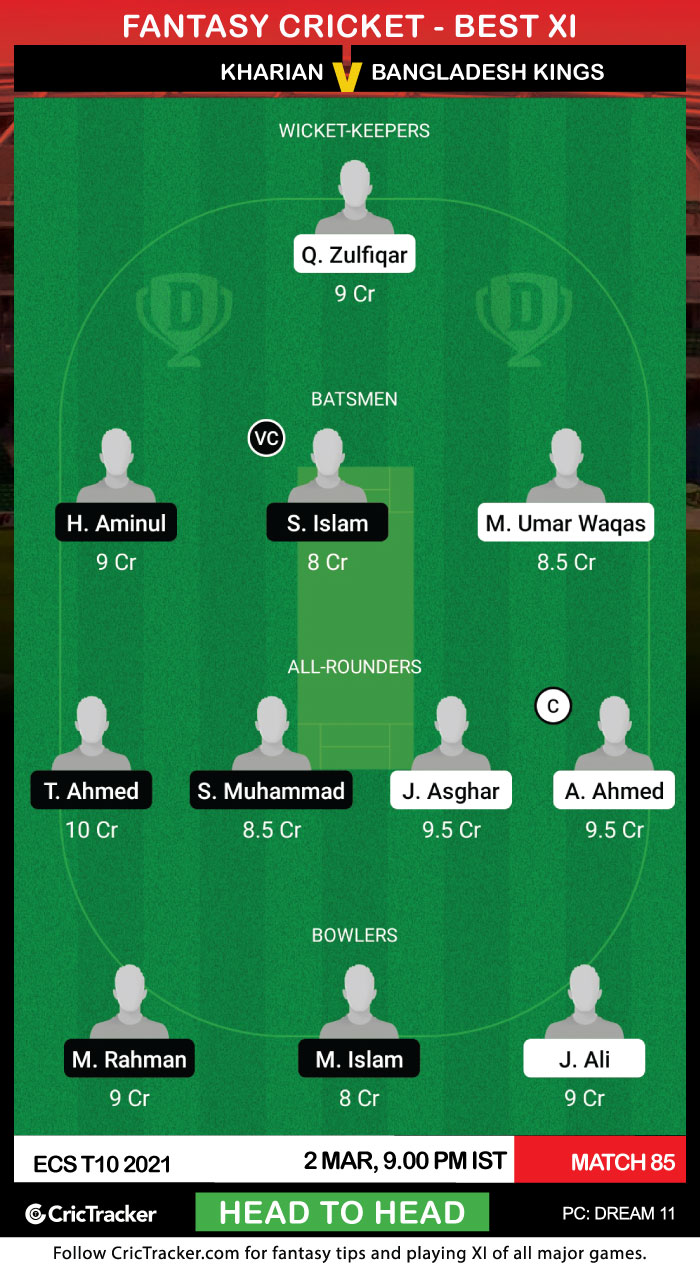 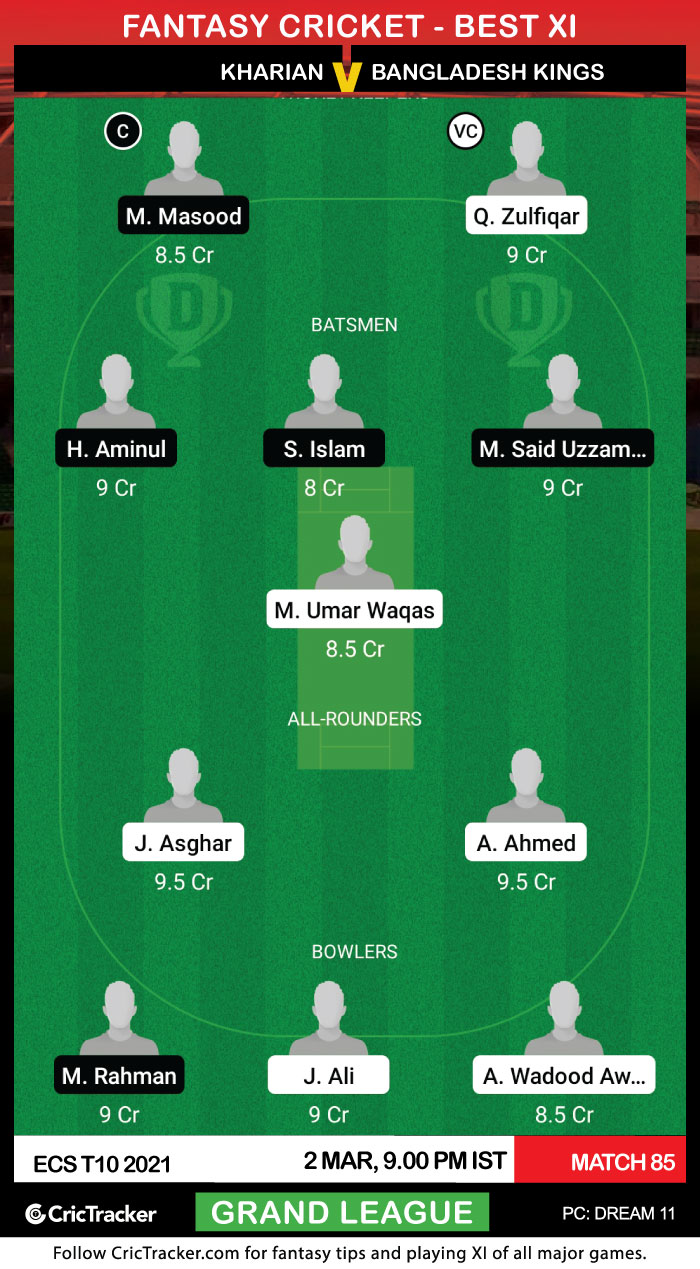 Sofiqul Islam and Muhammad Masood have scored over 100 runs each for Bangladesh Kings. They are must picks for your Dream11 Fantasy team.

Bangladesh Kings are expected to win this match.