Punjab Lions CC are expected to win this match. 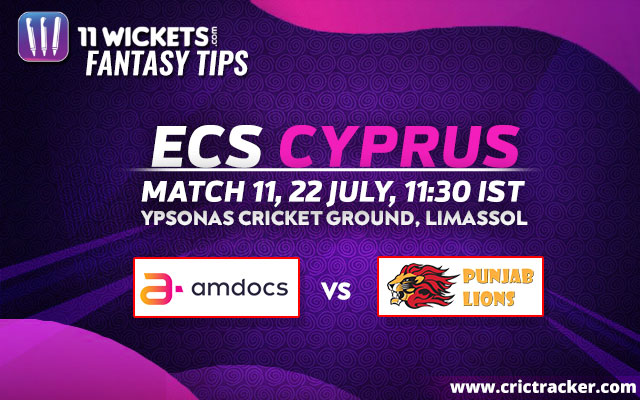 The 11th match of the ECS T10 Cyprus between Punjab Lions CC and Amdocs CC will be played at the Ypsonas Cricket Ground.

The unbeaten Punjab Lions CC will face the struggling Amdocs CC for the second time in Match 11 of the ongoing ECS Cyprus T10. Punjab Lions CC have so far won all their four matches while their opposition is struggling big time having lost three matches and are yet to taste a win. Rather these two teams met each other in the first match of the tournament. Punjab Lions won that game easily by 10 wickets.

No rain interruption is expected with the temperature to be in the early 30s on Wednesday morning.

The average score of 115 makes the behaviour of the pitch clear. Expect the batsman to dominate the proceedings on the third day as well.

Waqas Akhtar picked four wickets in the last match and has scored 38 runs in the tournament so far. Harwinder Singh impressed scoring 42 runs opening the innings. Gurapratap Singh is the top bowler having picked two wickets in the last game. For the Amdocs CC, Swaroop is the best batsman and also scored a half-century in the last match. Vimal Khanduri and Ashish Srivastava are the other top players.

Punjab Lions CC benched their top three players in the last game. If they play, then without any doubt, pick them and make C or VC of your teams.

Punjab Lions CC are expected to win this match.