Ihsanullah Wafa is the best option to make captain in this match. 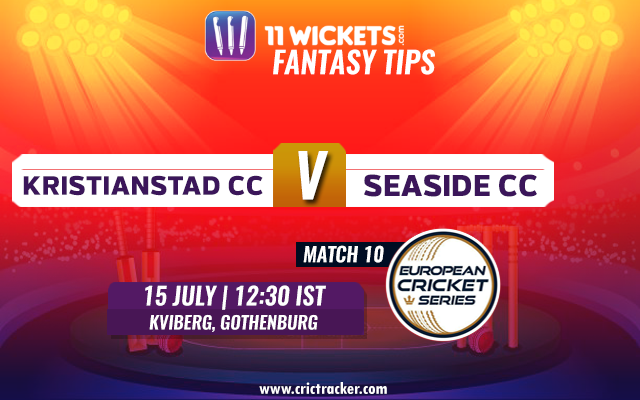 The 10th match of the ECS T10 Gothenburg will be played between Kristianstad CC and Seaside CC at the Kviberg in Gothenburg.

The 10th match of the ongoing will witness the Kristianstad CC locking horns against the Seaside Cricket Club in the first game of the day. This will be the penultimate match for the Seaside CC in the league stage and they will be eager to come up with their best effort in order to strengthen their position in the points table. Kristianstad CC, on the other hand, will be playing their first game of the tournament and will like to begin their campaign on a winning note.

Rain is likely to hamper the proceedings the first match. There is around 40% chance of scattered thunderstorms in Gothenburg on Wednesday.

After the opening game, no team has breached the 100-run mark. Interestingly, it was the Seaside CC who chased down 102 runs in the first match after which, the teams batting first have managed scores around 80-90 only.

Seaside CC skipper Umair Chaudary has found his groove as he scored an impressive 44 off just 27 balls. Mokhtar Ghulami has mustered 48 runs in two matches so far while Rubel Pathak is also an explosive batsman. Among the bowlers, Usman Sarwar and Ashiq Hossain are good options.

For Kristianstad CC, Ihsanullah has been the best player mustering 379 runs in 12 T20s at an SR of over 150. He has also accounted for six wickets. Faridullah Khawri (15 wickets in 11 T20s) and Hafizullah Shinwari (13 wickets in 9 T20s) are the top players.

(Seaside CC played only two matches until this article was published. So only those stats have been mentioned)

Only three aforementioned players from Kristianstad CC are expected to do well. Don’t miss picking them in your Fantasy team.