Jonkoping CA is expected to win this match. 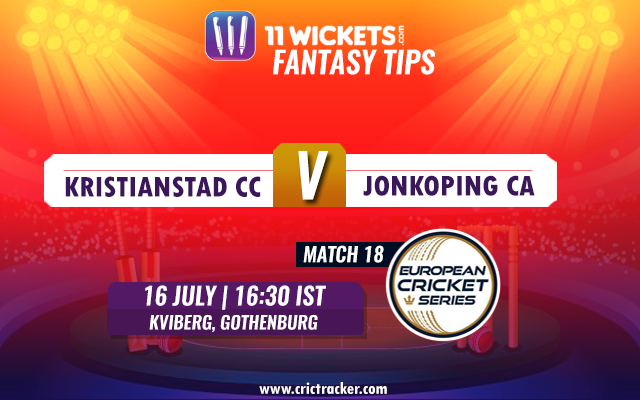 The 18th match of the ECS Gothenburg T10 between Jonkoping CA and Kristianstad CC will be played at Kviberg in Gothenburg.

Kristianstad CC will take the field on the final day of the league stages after a busy Wednesday. They have lost three of their four games so far and will have to win both their remaining matches to make it to the knockouts. Jonkoping CA, on the other hand, have also won only a solitary game before losing to Seaside CC via Golden Ball rule. Expect them to come hard at the opposition.

It will be overcast in Gothenburg during the game but it isn’t expected to rain.

The surface has been a decent one for both batsmen and bowlers. With the dark clouds hovering over, it will be tough for the batsmen to score more than 80-90 runs.

Ihsanullah Wafa hasn’t bowled much in this tournament thus far but he has shone with the bat scoring a half-century in the last game. Riaz Khan played a brilliant knock of 44 runs in the previous outing. Nasir Batcha also did well with the bat scoring 48 runs in the last match. Muhammad Ismail picked up two wickets and also bowled a maiden over in the erstwhile encounter.

Wait for the final playing XIs to be announced before finalising your Fantasy teams as teams make unexpected changes to XIs.

Jonkoping CA is expected to win this match.