Awal Khan-Safi picked up three wickets in the three games on Monday and also scored 40 runs with a best of an unbeaten 29.

The 8th match of the ECS T10 Kummerfeld, 2020 will be played between PSV Hann Munden and VFB Fallersleben at the Kummerfeld Sport Verein in Kummerfeld.

The Tuesday’s matches of the ECS T10 Kummerfeld will conclude with the game between PSV Hann Munden and VFB Fallersleben. This match will also see the end of PSV Hann Munden’s five fixtures in the league phase. The PSV Hann played three matches on Monday where they registered two victories. Their 4th game will be against the SC Europa Cricket scheduled to start at 11:30 AM local time. The PSV team would be looking for two points which could put them in the top four spots of the points table.

The game between PSV Hann Munden and VFB Fallersleben will be under cloud covering.

The Kummerfeld Sport Verein didn’t slow down during the Monday’s evening match despite three games being played in the lead up on the same track. A total of 185 runs were scored during the game including a 106-run total by the MTV Stallions.

Amin Zadran bowled only three overs on Monday where he picked up two wickets despite conceding 41 runs. Awal Khan-Safi picked up three wickets in the three games on Monday but conceded at an economy rate of 10.83 and also scored 40 runs with a best of an unbeaten 29. Satish Kumar Muthyala scored 130 runs and also claimed 15 wickets across the eight matches he played for the Fallersleben in club cricket. Janardhan Siddaiaha scored 129 runs across five club matches at an average of over 25 and also took three wickets there. 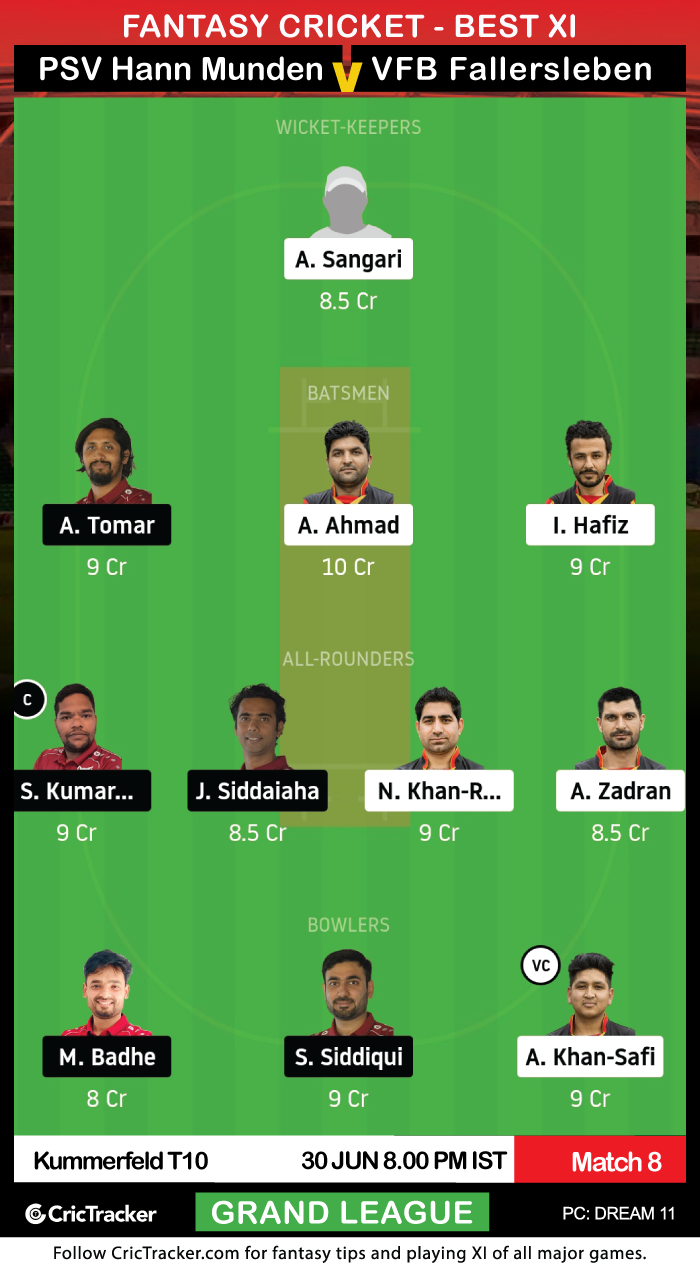 The playing XI of the PSV Hann Munden for this game could well depend on the outcome of their match against SC Europa Cricket. The PSV team won two of the three matches they played on Monday and a victory against SC Europa will confirm their place in the knockouts. Hence, The PSV Hann could be seen resting some big names as they play all their five league matches in space of 30 odd hours.

The PSV Hann Munden is expected to finish the day with a victory over the VFB Fallersleben.