Zain Mohamad took two wickets in the four overs he bowled at an economy rate little under ten. 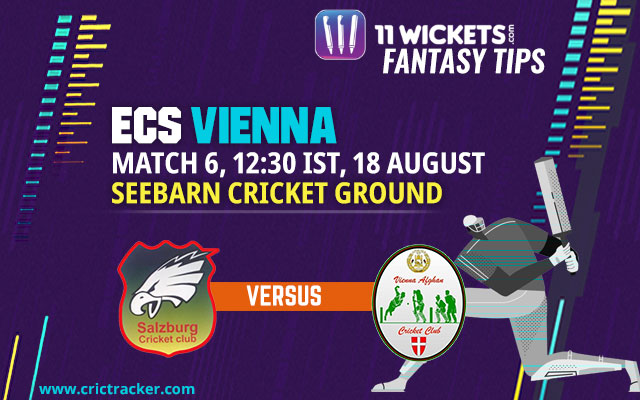 The 6th match of the ECS T10 Vienna, 2020 will be played between Salzburg CC and Vienna Afghan CC at the Seebarn Cricket Ground in Harmannsdorf.

Salzburg CC and Vienna Afghan CC teams will lock horns on Tuesday morning after being the only teams to win their first two matches of the tournament that were played on Monday. Both the teams started off their respective campaigns with close wins against the Indian CC Vienna only. Once again on Tuesday, all the five teams in the tournament get to play twice. The Vienna Afghan CC will face the Pakistan CC team in the 1:00 PM match while the Salzburg CC will be up against Austria CC Wien in the match scheduled to start at 3:00 PM.

The match between Salzburg CC and Vienna Afghan CC at Seebarn Cricket Ground could well under showers.

The Seebarn Cricket Ground, as expected, produced big totals on the opening day of ECS T10 Vienna same as the tracks did for the Austrian T10 held in July where 100+ totals were registered in seven out of the ten matches.

Noor Ahmadzai scored 52 runs in one match and bagged a duck in the other. He also claimed a wicket while conceding 24 runs.

Nisar Ahmed scored 38 runs in two matches at a strike rate over 170 with a best score of 26.

Shahbaz Muhammad took two wickets in the 1.3 overs he bowled in the second match while conceding only eight runs.

Zain Mohamad took two wickets in the four overs he bowled at an economy rate little under ten.

All-rounders on both the sides for this match are pretty useful with both bat and ball. However, only four from this category can be picked in the fantasy XI. Hence, we have to pick players who are likely to dominate with the bat. The bowlers have been earning negative points due to the high-scoring match.

Vienna Afghan CC is expected to register their 3rd consecutive win by defeating Salzburg CC in a thriller.