Here's the Fantasy XI for the game between KKR and RR.

This CrickingDuels Fantasy guide is for the eliminator of the ongoing Indian Premier League (IPL) season which will be played between Kolkata Knight Riders (KKR) and Rajasthan Royals (RR). The Eden Gardens will host this thrilling encounter as the teams will look to give their 100 percent. The advantage though will be with the home side as they have beaten the Royals recently at the same venue. However, they can ill afford to take things for granted as the visitors will be riding high on confidence after their previous game.

Dinesh Karthik has led the team well so far and has successfully made it to the playoffs. But the real test of his captaincy will start now as there will be no room for any mistake. Ajinkya Rahane will be delighted with his team’s performance in the last encounter and should be banking on them to come good again. The skipper himself needs to lead from the front as well and should open the innings thereby stopping all the experiments at the top of the order. Here we bring to you the CrickingDuels Fantasy guide for the game:

The top-order of KKR is in exceptional form and I have decided to go with Chris Lynn and Robin Uthappa. While the former has been batting sensibly this season, the IPL veteran Uthappa has struck form at the right time for his team. Sanju Samson has tapered off completely as the season has progressed and the youngster will rock this game for sure. He is due for a big knock and there could be no better occasion for him to step up to the task. Rahul Tripathi impressed me a lot in the previous game as he played a Buttler like innings and remained unbeaten throughout.

Krishnappa Gowtham is my favourite pick in this department and it goes without saying that he will play a key role for the Royals. He bowls in the powerplay for his team and then comes down the order to finish things off. Andre Russell is a similar kind of cricketer for the Knight Riders. But his batting has not been needed recently and he is delivering with the ball really well.

There is only one option here and that is of Dinesh Karthik. It leaves me perplexed that Heinrich Klaasen is in the category of the batsmen and Jos Buttler won’t play which means everyone will go for Karthik. His contribution doesn’t really make any difference now. But he has led the team nicely and has emerged as a finisher this season.

Ben Laughlin landed his yorkers well at the death in the last game and is a genuine wicket-taker which makes me pick him in my line-up. Ish Sodhi is another bowler of the Royals for me who has bowled superbly in the limited appearances so far. He should continue in the same vein for his team. Sunil Narine is exceptional for KKR and his contribution with both bat and ball cannot be undermined by any means. Kuldeep Yadav, the mystery chinaman, is the final player and he has the ability to run through any batting line-up on his day.

Note: You can also join the Hybrid Fantasy League introduced for the first time by CrickingDuels. 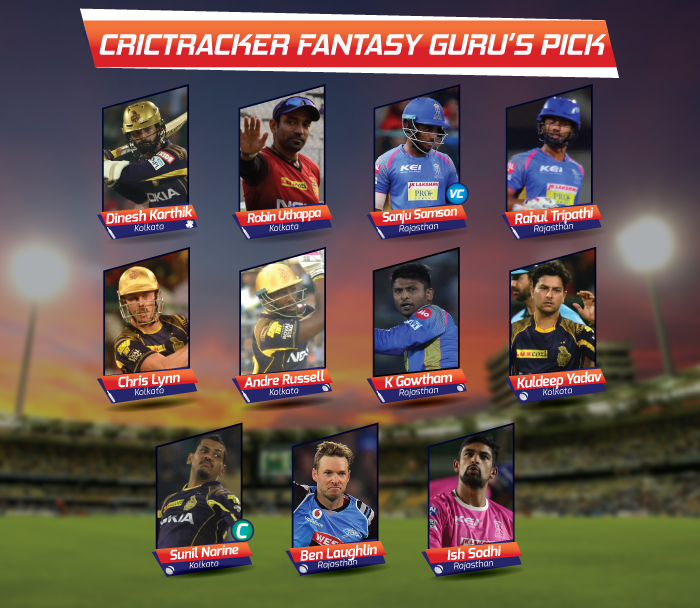