Mohammad Boota is a must-buy for your Dream11 fantasy team.

The 11th Match of the Emirates D10 2021 will be played between Fujairah and Emirates Blues on 27th March at Sharjah Cricket Stadium in Sharjah.

The match is scheduled to start at 7:15 PM local time and (8:45 PM IST) and it will be streamed live on Fancode.

Fujairah will go head-to-head against the Emirates Blues in the 11th Match of the Emirates D10 2021 on Saturday. After losing their 1st encounter in a close contest against Sharjah by 9 runs, Fujairah are back to winning ways by beating Dubai and Abu Dhabi convincingly in their 2nd and 3rd matches respectively. Waseem Muhammad, who was short of runs in the first two matches, has delivered spectacularly in the last match, striking at the rate of 290.90. With one loss and two wins, Fujairah are at the 3rd spot in the standings with 4 points. They need to carry the same momentum against Emirates Blues, who are yet to lose in this tournament.

Meanwhile, Emirates Blues are off to a flyer in this competition, having won 3 matches on the trot. They have made things look very simple and it is evident from their results. All of their 3 victories were convincing and they would want to carry forward the same momentum for the rest of the matches. Their top 3 batsmen are in sublime form and it is difficult to get rid of them. The Blues have occupied the top spot in the standings with 6 points.

It will be bright and sunny during the daytime here in Sharjah with the maximum temperature hovering at 35 degrees Celsius, whereas evenings will be calmer with a temperature of 28 degrees Celsius. There is no chance of precipitation for this match.

It’s getting better and better to bat on as the tournament has progressed. Short boundaries, quick outfield, and flat surface are all assisting the batsmen really well. Overall, we can say it’s a good pitch for this T10 format and we can another high-scoring game.

After scoring 8 runs in the first two matches, Waseem Muhammad found his form in the 3rd match against Abu Dhabi and scored 32 runs from just 11 deliveries. He got one wicket to his name as well.

Chirag Suri’s contribution is always vital for his side, as whenever he scores runs, the chances of winning matches of Fujairah increases exponentially. In 3 matches, he has scored 48 runs at an average of 24 at a strike rate of 228.57.

Alishan Sharafu has been the major performer in the first two matches with the bat for Fujairah, scoring 50 runs in 2 innings at a strike rate of 138.88.

Mohammad Boota is in tremendous form at the moment with the bat. He is the leading run-scorer so far in this competition with 160 runs in 3 matches at an average of 160 and a strike rate of 197.53, with the highest score of 71.

Chundangapoyil Rizwan has contributed well in all the departments. He has scored 70 runs in 3 matches at an average of 35 and a strike rate of 170.73 and has even scalped 3 wickets.

Laxman Manjrekar is the second-leading run-scorer for Emirates Blues so far, having scored 81 runs in 2 innings at a strike rate of 270. He has also picked up one wicket. 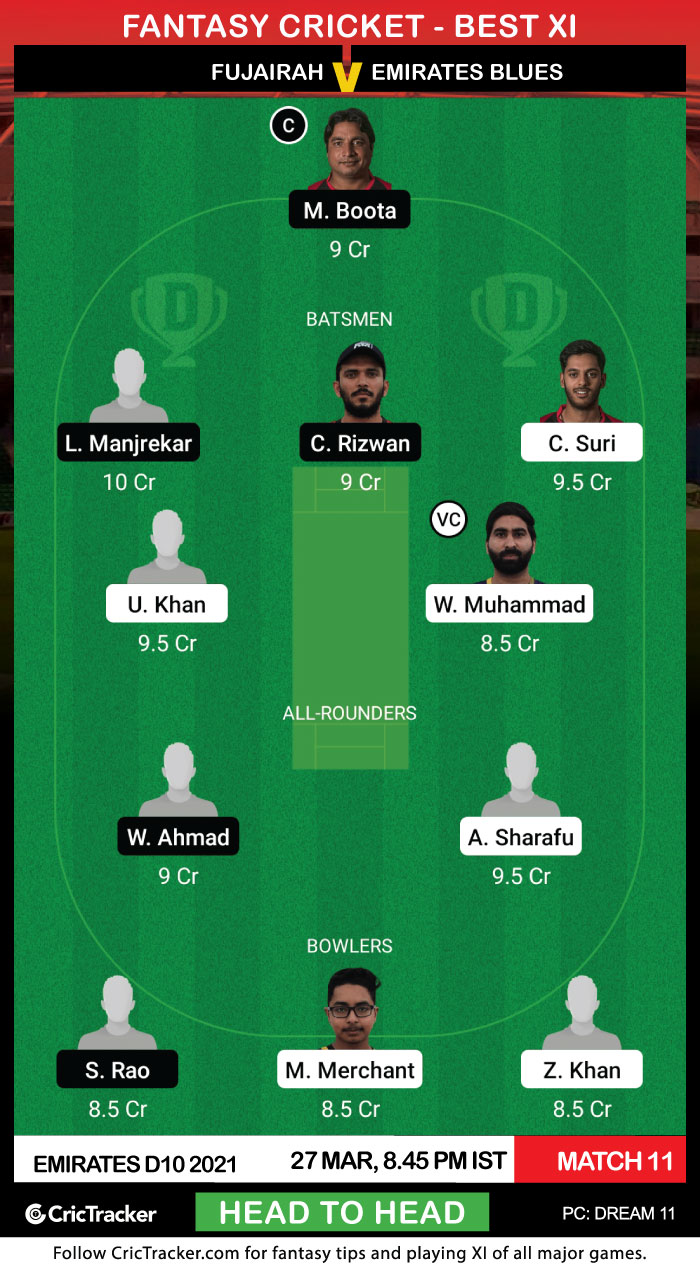 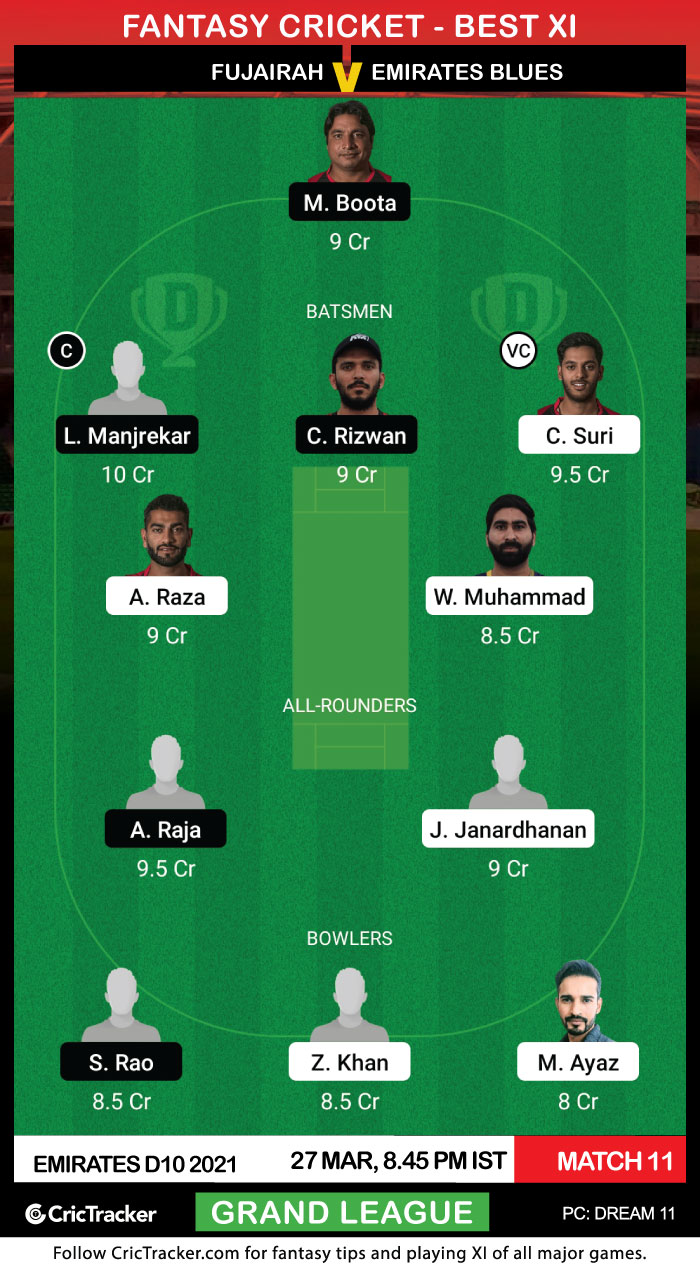 Mohammad Boota is a must-buy for your Dream11 fantasy team, since he averages 160 in the 3 matches he has played.