Batters are fetching more points for their respective sides and hence consider picking 6 batters in one of your Dream11 fantasy teams.

The 19th Match of the Emirates D10 2021 will be played between Dubai and Fujairah on 31st March at Sharjah Cricket Stadium in Sharjah.

Dubai will go one on one against Fujairah in the 19th Match of the Emirates D10 2021 on Wednesday. Dubai’s losing streak continues in this tournament as they lost their 5th match of the tournament against Emirates Blues last night. They made plenty of changes to their line-up and even some of their main players went missing.

At present they are at 5th spot in the standings with 2 points and have a net run-rate of -2.783. Dubai got beaten by Fujairah in the last head-to-head contest by 26 runs which is a huge defeat in this format. They need to come up with a better game plan against a top-quality side.

On the other hand, Fujairah’s battle for the top spot in the standings goes on and they are slightly behind Emirates Blues in terms of net run-rate and they occupy 2nd spot in the standings with 10 points. They went on to beat Sharjah by 40 runs in their previous match and gave them a perfect reply for their early loss in the tournament.

They have got a formidable top-order batting line-up with the likes of Waseem Muhammad, Usman Khan, and Chirag Suri. They had better of Dubai in their previous meeting and it’s going to be an easy game for them considering their current form.

Ideal weather conditions to play cricket here in Sharjah with the temperature hovering at 28 degrees Celsius and the humidity levels are high at 88 percent. There is no chance of precipitation for this match.

We witnessed another eventful batting day on Tuesday with some high-scoring thrillers. Any total on the board is not safe on this venue, since the boundaries are too small. As the tournament progressed, the surface has become much easier to bat on and still it’s a chasing venue, and whoever wins the toss should bowl first.

120(Last 5 matches played on this venue)

Dubai skipper Shahrukh Sheikh is having a decent tournament with the bat. He even scored 17 runs in the losing cause against Emirates Blues in the previous game. Overall he has scored 89 runs from 6 matches at an average of 22.25.

Bilal Cheema was the top-scorer for Dubai in the previous match against Emirates Blues, scoring 26 runs at a strike rate of 200 which included 2 fours and 2 sixes.

Muhammad Hassan is a good pick under All-rounder’s category. Coming at No.6 against Emirates Blues he scored 20 runs from 12 balls. With the ball, he has picked up 4 wickets in 4 matches.

Waseem Muhammad blasted the Sharjah bowlers in the previous match, scoring 70 runs from just 27 balls which included 5 fours and 6 sixes. He is the leading run-scorer for Fujairah with 183 runs in 6 matches at an average of 30.5 with a strike rate of 240.78. He even picked up 3 wickets at an economy of 9.85.

Even after failing to score runs in the previous match against Sharjah, Chirag Suri is still the 2nd most run-scorer for his side and 5th in the list of top run-scorers in this tournament. Overall he has scored 131 runs in 6 matches at an average of 32.75 with a strike rate of 214.75.

Yasir Kaleem came out of nowhere and scored 43 runs against Sharjah which comprised of 3 fours and 4 sixes. He is a good budget pick in the batters category at 8 credits. 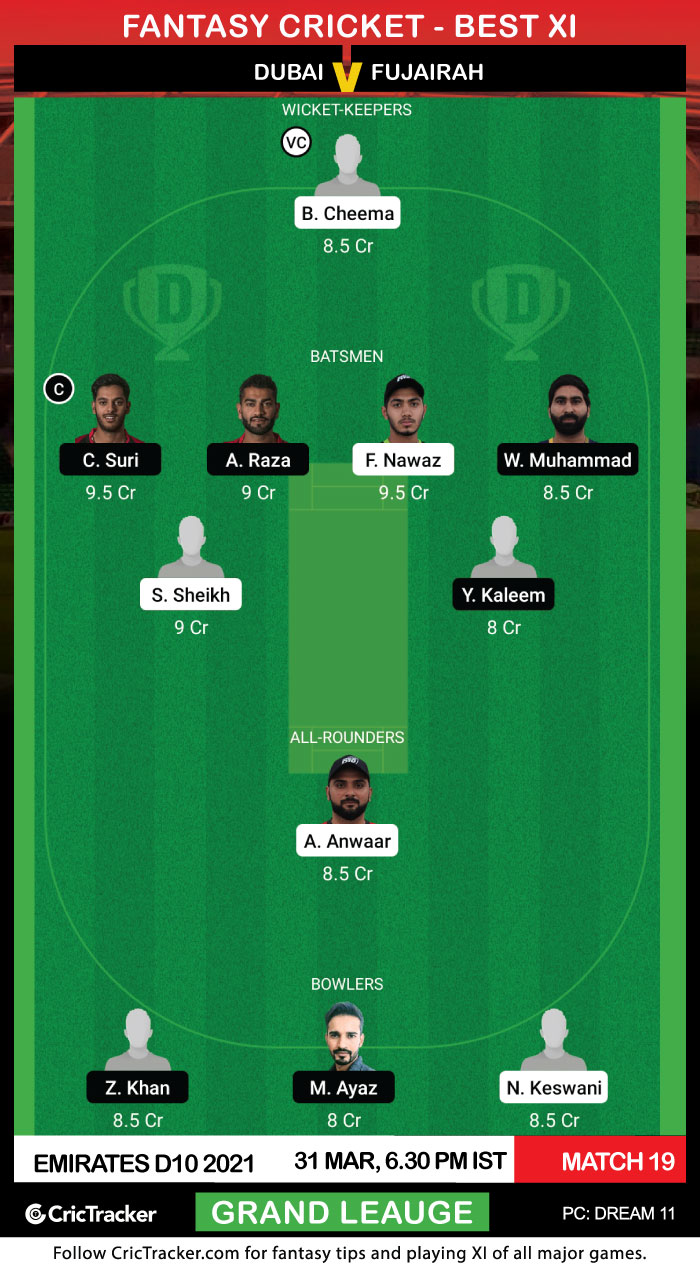 Batters are fetching more points for their respective sides and hence consider picking 6 batters in one of your Dream11 fantasy teams.