It is advisable to pick Asif Khan as the captain of any one of your Dream11 Fantasy teams.

Match 24 of the Emirates D10 2021 will be played between Abu Dhabi and Ajman at the Sharjah Cricket Stadium in Sharjah on 2nd April, Friday.

The match is scheduled to start at 11:00 PM IST and it will be streamed live on Fancode.

Abu Dhabi and Ajmanwill go head-to-head in the Emirates D10 2021 on Friday. Abu Dhabi are placed at the bottom of the points table with no wins so far in the tournament after 5 matches. On the other hand, Ajman are placed fourth with 4 wins in 7 games they have played in this season.

Ajman have won their last two matches in a convincing manner and will be favourites going into this match as well. Abu Dhabi have failed to impress with both bat and ball in this season of Emirates D10. Ajman will be looking for a hat trick of wins after this match, whereas Abu Dhabi will be eyeing their maiden victory in the tournament.

The weather in Sharjah is expected to be very warm with plenty of sunlight and low humidity on Friday. The temperature will be around the 35-degree mark during the day.

Most matches played on this pitch have witnessed 100+ runs being scored in both innings. Batsmen also have an advantage in the form of the small dimensions of the ground.

Right-handed batsman Asif Khan is the leading run-scorer of the tournament. He has scored 306 runs at an impressive strike rate of 230.

Abdul Shakoor is the second-highest run-scorer for Ajman. He has scored 104 runs, including 5 sixes and 9 boundaries to his name.

Sheraz Ahmad is the leading wicket-taker for Ajman. He has picked up 7 wickets at an economy of 8.54 runs per over.

Fayyaz Ahmed has picked up most wickets for Abu Dhabi. He has 5 wickets under his belt from the 5 games he has played in the tournament. 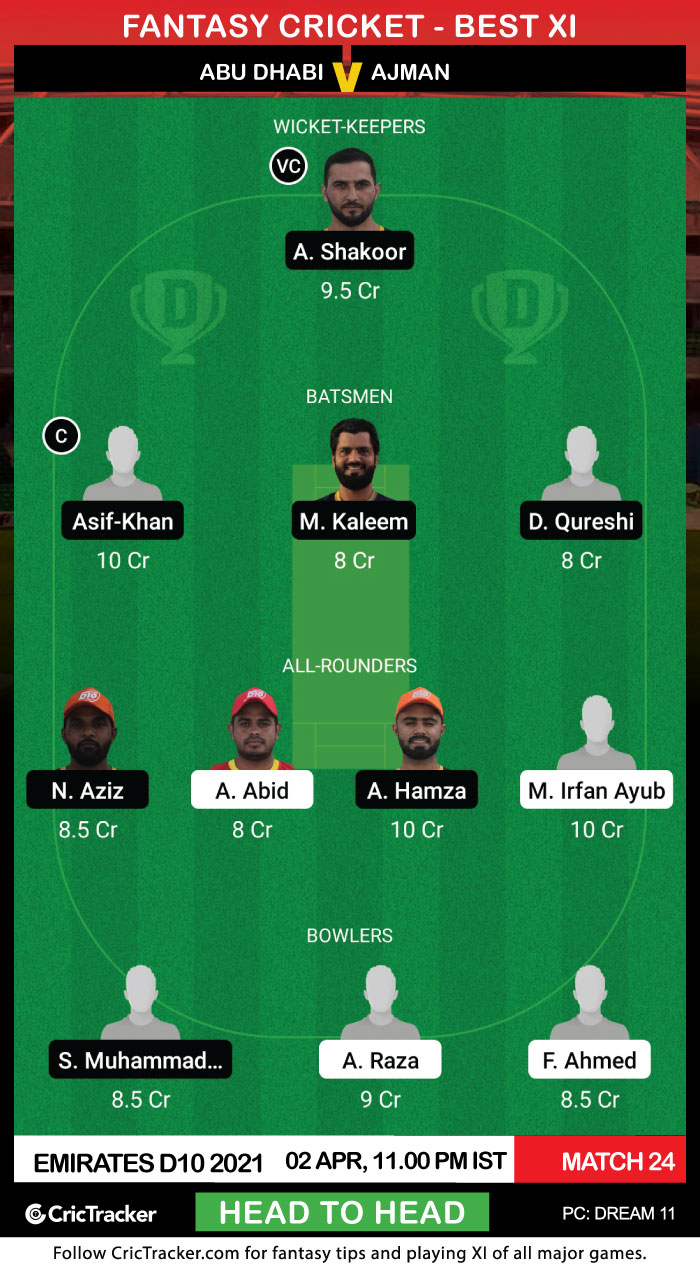 It is advisable to pick Asif Khan as the captain of any one of your Dream11 Fantasy teams as he is in good form with the bat.

Ajman are expected to win this match.