Chirag Suri is a hit or miss kind of batsman, it's up to your risk to keep him as multiplier in your 11Wickets fantasy team. 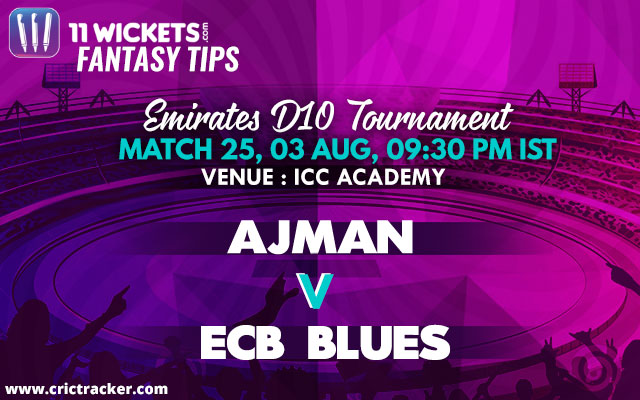 The 25th match of the Emirates D10 League between Ajman Alubond and ECB Blues will be played at the ICC Academy Cricket Ground in Dubai.

ECB Blues is up against Ajman Alubond in the second game on Monday. Former have lost only two matches out of 8 games in the tournament. ECB Blues won their last match against Dubai and their opponent Ajman won against Fujairah. Both teams will look to win this game to keep the momentum going forward for the playoffs.

The weather would be clear during the game and no rainfall is predicted. The temperature will be in mid 30s.

The pitch at this ground will be a batsman paradise and high-scoring game can be expected. Bowlers need to bowl tight line and length to contain the flow of runs.

Vritiya Aravind is the most consistent batsman of his side scoring 299 runs in just 8 matches. Mohammad Usman, Rohan Mustafa and Chirag Suri are the other good batsmen for ECB Blues. Ameer Hamza has been a decent batsman and Saqib Manshad took 5 wickets in 5 matches.

Chirag Suri is a hit or miss kind of batsman, it’s up to your risk to keep him as multiplier in your 11Wickets fantasy team. Also, take Sapandeep Singh if he is in the playing XI.