ENG vs AUS, 4th ODI - Match Prediction: Who will win the match?

ENG vs AUS, 4th ODI – Match Prediction: Who will win the match, England or Australia?

Will Australia be able to pull one back on the hosts?

Here are the famous dead rubbers in the five-match ODI series. England have won the contest by thumping their arch-rivals in the initial three matches itself and would be eager to pile on the agony on the visiting team. The third ODI saw Australia conceding the highest ever score in ODIs and their problems have compounded compared to the start of the series. However, it seems that the series is still going only one way despite the fact that the Men in Yellow will be playing freely without any pressure.

England batsmen are in amazing form as they keep coming at the opposition with the fall of every wicket. Eoin Morgan has already termed this period as the best ever of his career and would be eager to continue their domination in the series. Tim Paine, on the other hand, was out of ideas the other day as his bowlers failed to contain runs at any stage in the 50 overs of the first innings.

The match will be played at the Riverside Ground in Chester-le-Street where the scores have not been on the higher side. But the way England is batting currently, the record for the highest score at the venue (307) could be easily broken. The pitch might also slow down a bit later in the innings which would force the captains winning the toss to bat first.

England is likely to test their bench strength now and rest their bowlers who have been exceptional so far in this series. Liam Plunkett and Mark Wood will be rested ahead of the busy summer making way for Jake Ball and Tom Curran. The latter has done well previously down under and Ball is returning after a long layoff due to an injury. The batting line-up shouldn’t be changed though as the race for a place in the top 3 is heated up with Alex Hales regaining his form big time.

Australia is out of options it seems as they have struggled right through the series. D’Arcy Short has not contributed anything in the last two matches and should make way for more enterprising Alex Carey. He should open the innings along with Travis Head who looked decent in the chase in the third game. Moreover, Kane Richardson should also come back for this game as Andrew Tye will be most probably dropped after conceding 100 runs in his 9 overs.

The prediction is for England to continue piling on their misery on the Aussies. 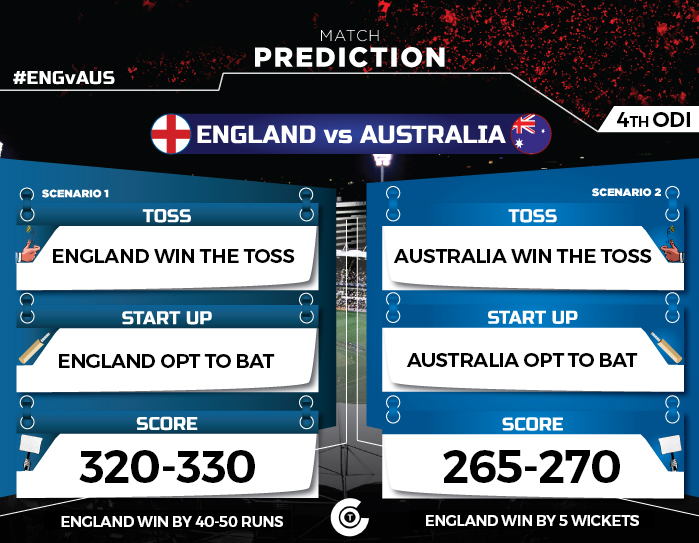