Rory Burns has been in red-hot form since the start of the English cricket season. 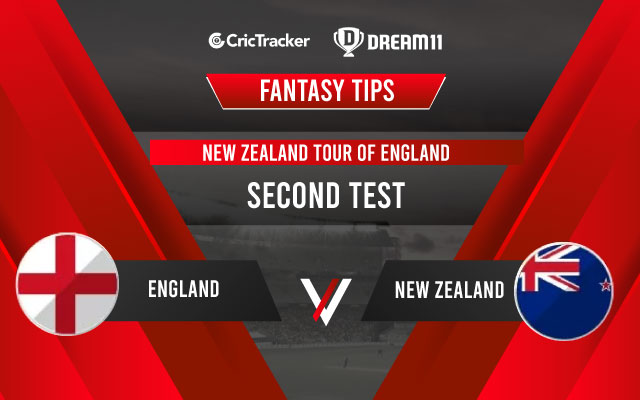 The first Test was somewhat spoiled due to the rain. It can be said that the match would have found a result, had it not rained throughout day three of that Test. Having said that, New Zealand would be slightly on the back foot after Kane Williamson was ruled out of the second Test. Tom Latham will take charge of the team.

On the other hand, England has a few problems with their batting, which is something captain Joe Root seems to be coming to terms with. He should be happy with the way his batters performed to save the previous Test but will know that even the bowling unit doesn’t look in the best shape at this moment.

The Edgbaston has a classic Test match wicket. It stays nice and firm offering a hint of swing and seam on the first two days of the Test match. The days keep passing, the wicket roughs up a bit and the spinners can come into play more and more. We can expect a well balanced wicket.

Devon Conway started his Test career with a double hundred at Lord’s and was looking quite impeccable during the second innings as well. But, he did get out for a 28. He would look to continue his good form.

Rory Burns has been in some sensational batting form coming into the series. He scored seven 50+ scores for Surrey before this series and then went on to hit that brilliant first innings hundred at Lord’s.

Colin de Grandhomme didn’t bat quite well in the first Test. He did a fair job with the ball, but he failed to pick wickets which kind of didn’t matter a lot to New Zealand.

Joe Root has now become an all-rounder simply because he is the only batsman in this English side, who can bowl a bit. He did manage to pick a wicket in the first Test apart from scoring 82 runs in two innings.

James Anderson’s record in Edgbaston is something that he would be proud of. Having saved themselves from a loss in the first match, the onus to get a win in this Test would be on a senior player like Anderson.

Neil Wagner managed to scalp three wickets in the previous match. His spell in the second innings, when he took two wickets, was highly impressive and he would want to pick up from that.

BJ Watling will be playing his second last Test match and considering his record in Test cricket, he is one of the most experienced batters in this team right now. He ended the Lord’s Test with just 16 runs and would look for some runs in this match.

ENG vs NZ Must Picks for Dream11 Fantasy Cricket:

James Anderson is a World Class bowler without a doubt but in a Test match, picking him as the captain might not be the best idea. Especially, because he has started playing the role of a bowler who bowls only in spells when conditions are helping him.

Colin de Grandhomme hasn’t really played a lot of first-class cricket recently, which is something that was visible in the first Test. It is better to avoid him.

Zak Crawley has not found his rhythm in recent times. He scored a grand total of four runs in the previous match, two runs in each innings. It is better to avoid him.