The second T20I match of the series between England Women and West Indies Women is all set to be played at County Ground in Derby.

The women’s team of West Indies is currently having a very rough time in English conditions. In a five-match T20I series, they have lost the first two matches quite comprehensively. In the first T20I, England gave them a target of 163. They could only muster up 116 in the chase.

The second run chase was even worse. Chasing a modest total of 151, all that Stafanie Taylor’s girls could manage was 104. They will be desperate to turn things around on Saturday at County Ground. On the other hand, ruthless England would look to seal the series with two games to spare.

We can expect a sunny day in Derby. The temperature is expected to be around 12 degrees Celsius.

The pitch at Derby is fairly balanced in nature, but batting is difficult in the first few overs. Once the threat of the new ball is off, batting becomes much more easier.

Tammy Beaumont has scored 89 runs in the first two T20Is, which includes a brilliant half-century. She has maintained a stunning average of over 40 and a strike rate of nearly 130.

Sophie Ecclestone is England Women’s leading wicket-taker in this series, having picked up 4 wickets in 2 games. She has an average of less than 10 and a brilliant economy rate of less than 5 runs per over.

Deandra Dottin has been the standout performer for West Indies women. She has scored 107 runs in 2 games, with an average of over 50 and a strike rate of almost 110. She has a half-century to her name.

Shakera Selman is the leading wicket-taker of the series so far. She has picked up 5 wickets in 2 games so far. Selman has an economy rate of just over 7 runs per over and an average of slightly over 10.

Stafanie Taylor has impressed with her all-round performances so far. The West Indian skipper has picked up 4 wickets with an economy rate of less than 6 runs per over. She also has scored 36 runs at an average of 18.

Suggested Playing XI No.1  of ENG-W vs WIN-W for 11Wickets Fantasy Cricket: 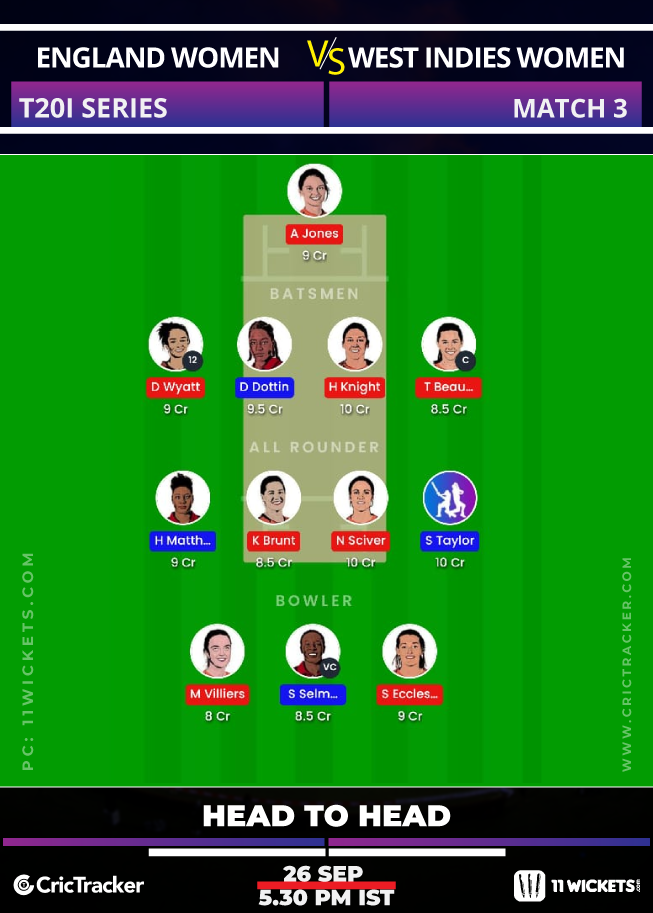 Suggested Playing XI No.2 of ENG-W vs WIN-W for 11Wickets Fantasy Cricket: 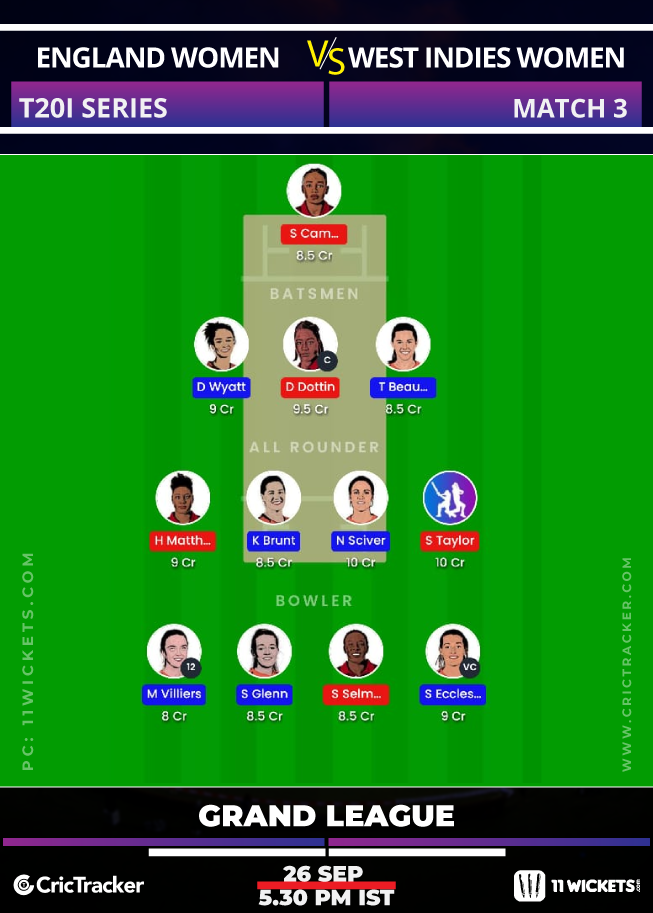 Sarah Glenn has been instrumental with the ball thus far. She has picked up 3 wickets in 2 games with an average of less than 20. She has also been very miser in leaking runs, boasting of an economy rate of just over 6 runs per over.